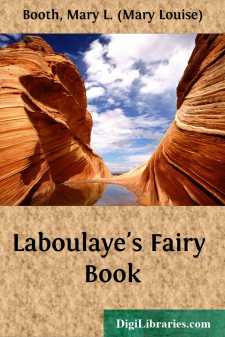 There was once a green book, deliciously thick, with gilt-edged pages and the name of the author in gilt script on the front cover.

Like an antique posy ring, it was a "box of jewels, shop of rarities"; it was a veritable Pandora's box, and if you laid warm, childish hands upon it and held it pressed close to your ear, you could hear, as Pandora did, soft rustlings, murmurings, flutterings, and whisperings from the fairy folk within. For this was a fairy book—Edouard Laboulaye's "Tales," and its heroes and heroines became first the daily companions, and then the lifetime possession, of the two little girls to whom it belonged.

From the New England village where it was originally given to them, it traveled to the far West and its tales were told to countless immigrant children of San Francisco, whose great eyes opened wider still as they listened, breathless, to stories beloved by their ancestors. In later years the green volume journeyed by clumsy, rattling stage and rawboned nags to Mexico, and the extraordinary adventures of "Yvon and Finette," "Carlino," and "Graceful" were repeated in freshly learned Spanish, to many a group of brown-cheeked little people on the hillsides of Sonora.

And now, long, long afterward, there stands on a shelf above my desk the very selfsame worn green volume, read and re-read a hundred times, but so tenderly and respectfully that it has kept all its pages and both its covers; and on this desk itself are the proofs of a new edition with clear, beautiful print and gay pictures by Edward McCandlish!

To be asked to write an introduction to this particular book seems insufferable patronage; yet one would do it for love of Laboulaye, or for the sake of one's own "little past," or to draw one more young reader into the charmed circle that will welcome these pages.

The two children who adored Laboulaye's "Tales" possessed many another fairy book, so why did this especial volume hold a niche apart in the gallery of their hearts?

Partly, perhaps, because of the Gallic wit and vivacity with which the tales are told, for children are never too young to appreciate the charms of style.

You remember, possibly, the French chef who, being imprisoned with no materials save the tools of his trade, and commanded on pain of death to produce an omelette, proudly emerged at last, bearing a savory dish made out of the sole of his shoe?

Of even such stuff Laboulaye could have concocted a delectable tale; but with Brittany, Bohemia, Italy, Dalmatia, Hungary, and Spain for his storehouses, one has only to taste to know how finely flavored are the dishes he sets forth.

In his preface to the first American edition Laboulaye writes a letter to Mlle. Gabrielle Laboulaye, aged two! In it he says: "When you throw away this book with your doll, do not be too severe with your old grandfather for wasting his time on such trifles as fairy stories. Experience will teach you that the truest and sweetest things in life are not those which we see, but of which we dream." Happy the children who have this philosophy set before them early in life.

Like the fairy tales Robert Louis Stevenson remembered, these of Laboulaye's have "the golden smell of broom and the shade of pine," and they will come back to the child whenever the Wind of Memory blows.

In common with the stories of Charles Perrault, literary parent of the fairy tale, Laboulaye's charming narratives have a certain unique quality due to the fact that they were intended and collected for the author's own children, were told to them round the fireside in the evening, and so received at first hand the comment and suggestion of a bevy of competent, if somewhat youthful, critics.

It is said that there is a great scarcity of fairy folk in modern France; and that, terrified by the thunders of the Revolution, they left their unhappy country in a body during its stormy years, first assembling in grateful concourse around the tomb of Perrault, upon whose memory they conferred the boon of immortality.

If this story is true—and the last reported act of the fairies on leaving France makes it appear so—then we may be sure that a few of the more hardy and adventurous fays skipped back again across the border and hid themselves in Laboulaye's box of jewels, where they give to each gem an even brighter sheen and a more magical luster....