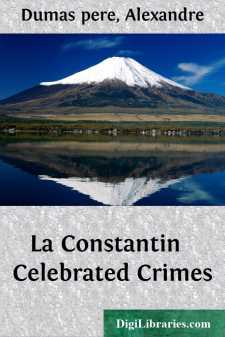 Before beginning our story, we must warn the reader that it will not be worth his while to make researches among contemporary or other records as to the personage whose name it bears. For in truth neither Marie Leroux, widow of Jacques Constantin, nor her accomplice, Claude Perregaud, was of sufficient importance to find a place on any list of great criminals, although it is certain that they were guilty of the crimes with which they were charged. It may seem strange that what follows is more a history of the retribution which overtook the criminals than a circumstantial description of the deeds for which they were punished; but the crimes were so revolting, and so unsuitable for discussion, that it was impossible for us to enter into any details on the subject, so that what we offer in these pages is, we confess quite openly, not a full, true, and particular account of a certain series of events leading up to a certain result; it is not even a picture wherein that result is depicted with artistic completeness, it is only an imperfect narrative imperfectly rounded off. We feel sure, however, that the healthy-minded reader will be grateful for our reticence and total disregard of proportion. In spite of the disadvantage which such a theme imposes on any writer with a deep sense of responsibility, we have resolved to let in some light on these obscure figures; for we can imagine no more effective way of throwing into high relief the low morals and deep corruption into which all classes of society had sunk at the termination of the factious dissensions of the Fronde, which formed such a fitting prelude to the licence of the reign of the grand roi.

After this explanation, we shall, without further preamble, introduce the reader to a little tavern in Paris, situated in the rue Saint-Andre-des-Arts, on an evening in November 1658.

It was about seven o'clock. Three gentlemen were seated at one of the tables in a low, smoky room. They had already emptied several bottles, and one of them seemed to have just suggested some madcap scheme to the others, the thought of which sent them off into shouts of laughter.

"Pardu!" said one of them, who was the first to recover his breath, "I must say it would be an excellent trick."

"Splendid!" said another; "and if you like, Commander de Jars, we can try it this very evening."

"All right, my worthy king's treasurer, provided my pretty nephew here won't be too much shocked," and as he spoke de Jars gave to the youngest of the three a caressing touch on the cheek with the back of his hand.

"That reminds me, de Jars!" said the treasurer, "that word you have just said piques my curiosity. For some months now this little fellow here, Chevalier de Moranges, follows you about everywhere like your shadow. You never told us you had a nephew. Where the devil did you get him?"

The commander touched the chevalier's knee under the table, and he, as if to avoid speaking, slowly filled and emptied his glass.

"Look here," said the treasurer, "do you want to hear a few plain words, such as I shall rap out when God takes me to task about the peccadilloes of my past life?...