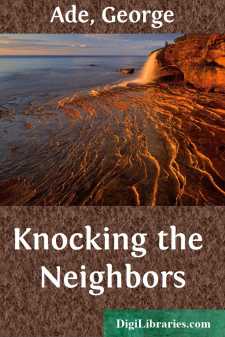 Out in the Celery Belt of the Hinterland there is a stunted Flag-Station.

Number Six, carrying one Day Coach and a Combination Baggage and Stock Car, would pause long enough to unload a Bucket of Oysters and take on a Crate of Eggs.

In this Settlement the Leading Citizens still wear Gum Arctics with large Buckles, and Parched Corn is served at Social Functions.

Two highly respected Money-Getters of pure American Stock held forth in this lonesome Kraal and did a General Merchandizing.

One was called Milt, in honor of the Blind Poet, and the other claimed the following brief Monicker, to wit: Henry.

These two Pillars of Society had marched at the head of the Women and School Children during the Dry Movement which banished King Alcohol from their Fair City.

As a result of their Efforts, Liquor was not to be obtained in this Town except at the Drug Stores and Restaurants or in the Cellar underlying any well-conducted Home.

For Eleven Months and Three Weeks out of every Calendar Year these two played Right and Left Tackle in the Stubborn Battle to Uplift the Community and better the Moral Tone.

They walked the Straight and Narrow, wearing Blinders, Check-Reins,Hobbles and Interference Pads.

Very often a Mother would hurry her little Brood to the Front Windowwhen Milt or Henry passed by, carrying under his arm a Package of CornFlakes and the Report of the General Secretary in charge of ChineseMissionary Work.

"Look!" she would say, indicating Local Paragon with index Finger. "If you always wash behind the Ears and learn your Catechism, you may grow up to be like Him."

But—every Autumn, about the time the Frost is on the Stock Market and Wall Street is in the Shock, Milt and Henry would do a Skylark Ascension from the Home Nest and Wing away toward the rising Sun.

At Home neither of them would Kick In for any Pastime more worldly than a 10-cent M. P. Show depicting a large number of Insane People falling over Precipices.

The Blow-Off came on the Trip to the City. That was the BigEntertainment.

Every Nickel that could be held out went into the little Tin Bank, for they knew that when they got together 100 of these Washers, a man up in New York would let them have some Tiffany Water of Rare Vintage, with a Napkin wrapped around it as an Evidence of Good Faith.

On Winter Evenings Milt would don the Velvet Slippers and grill his Lower Extremities on the ornate Portico such as surrounds every high- priced Base-Burner.

While thus crisping himself he loved to read New Notes from Gotham.

He believed what it said in the Paper about a well-known Heiress having the Teeth of her favorite Pomeranian filled with Radium at a Cost of $120,000.

Whenever he got this kind of a Private Peek into the Gay Life of theModern Babylon, he began to breathe through his Nose and tug at theLeash.

He longed to dash away on the Erie to look at the Iron Fence in front of the House of the Pomeranian....