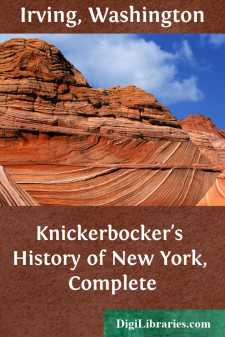 KNICKERBOCKER'S HISTORY OF NEW YORK is the book, published in December, 1809, with which Washington living, at the age of twenty-six, first won wide credit and influence. Walter Scott wrote to an American friend, who sent him the second edition——

"I beg you to accept my best thanks for the uncommon degree of entertainment which I have received from the most excellently jocose History of New York. I am sensible that, as a stranger to American parties and politics, I must lose much of the concealed satire of the piece, but I must own that, looking at the simple and obvious meaning only, I have never read anything so closely resembling the style of Dean Swift as the annals of Diedrich Knickerbocker. I have been employed these few evenings in reading them aloud to Mrs. S. and two ladies who are our guests, and our sides have been absolutely sore with laughing. I think, too, there are passages which indicate that the author possesses powers of a different kind, and has some touches which remind me much of Sterne."

Washington Irving was the son of William Irving, a sturdy native of the Orkneys, allied to the Irvines of Drum, among whose kindred was an old historiographer who said to them, "Some of the foolish write themselves Irving." William Irving of Shapinsha, in the Orkney Islands, was a petty officer on board an armed packet ship in His Majesty's service, when he met with his fate at Falmouth in Sarah Sanders, whom he married at Falmouth in May, 1761. Their first child was buried in England before July, 1763, when peace had been concluded, and William Irving emigrated to New York with his wife, soon to be joined by his wife's parents.

At New York William Irving entered into trade, and prospered fairly until the outbreak of the American Revolution. His sympathy, and that of his wife, went with the colonists. On the 19th of October, 1781, Lord Cornwallis, with a force of seven thousand men, surrendered at Yorktown. In October, 1782, Holland acknowledged the independence of the United States in a treaty concluded at The Hague. In January, 1783, an armistice was concluded with Great Britain. In February, 1783, the independence of the United States was acknowledged by Sweden and by Denmark, and in March by Spain. On the 3rd of April in that year an eleventh child was born to William and Sarah Irving, who was named Washington, after the hero under whom the war had been brought to an end. In 1783 the peace was signed, New York was evacuated, and the independence of the United States acknowledged by England.

Of the eleven children eight survived. William Irving, the father, was rigidly pious, a just and honorable man, who made religion burdensome to his children by associating it too much with restrictions and denials. One of their two weekly half-holidays was devoted to the Catechism. The mother's gentler sensibility and womanly impulses gave her the greater influence; but she reverenced and loved her good husband, and when her youngest puzzled her with his pranks, she would say, "Ah, Washington, if you were only good!"

For his lively spirits and quick fancy could not easily be subdued. He would get out of his bed-room window at night, walk along a coping, and climb over the roof to the top of the next house, only for the high purpose of astonishing a neighbor by dropping a stone down his chimney. As a young school-boy he came upon Hoole's translation of Ariosto, and achieved in his father's back yard knightly adventures. "Robinson Crusoe" and "Sindbad the Sailor" made him yearn to go to sea. But this was impossible unless he could learn to lie hard and eat salt pork, which he detested. He would get out of bed at night and lie on the floor for an hour or two by way of practice. He also took every opportunity that came in his way of eating the detested food. But the more he tried to like it the nastier it grew, and he gave up as impracticable his hope of going to sea. He fastened upon adventures of real travelers; he yearned for travel, and was entranced in his youth by first sight of the beauties of the Hudson River. He scribbled jests for his school friends, and, of course, he wrote a school-boy play. At sixteen his schooling was at an end, and he was placed in a lawyer's office, from which he was transferred to another, and then, in January, 1802, to another, where he continued his clerkship with a Mr. Hoffman, who had a young wife, and two young daughters by a former marriage. With this family Washington Irving, a careless student, lively, clever, kind, established the happiest relations, of which afterwards there came the deep grief of his life and a sacred memory.

Washington Irving's eldest brothers were beginning to thrive in business....