Klondike Nuggets and How Two Boys Secured Them 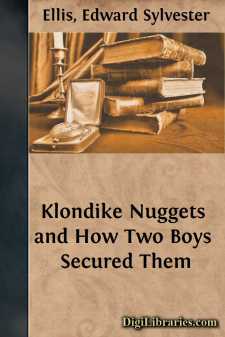 Jeff Graham was an Argonaut who crossed the plains in 1849, while he was yet in his teens, and settling in California, made it his permanent home. When he left Independence, Mo., with the train, his parents and one sister were his companions, but all of them were buried on the prairie, and their loss robbed him of the desire ever to return to the East. Hostile Indians, storm, cold, heat, privation, and suffering were the causes of their taking off, as they have been of hundreds who undertook the long journey to the Pacific coast in quest of gold.

Jeff spent several years in the diggings, and after varying fortune, made a strike, which yielded him sufficient to make him comfortable for the rest of his days. He never married, and the income from his investments was all and, indeed, more than he needed to secure him against want.

He was now past threescore, grizzled, somewhat stoop-shouldered, but robust, rugged, strong, and, in his way, happy. His dress varied slightly with the changes of the seasons, consisting of an old slouch hat, a red shirt, coarse trousers tucked in the tops of his heavy boots, and a black neckerchief with dangling ends. He had never been addicted to drink, and his only indulgence was his brierwood pipe, which was his almost inseparable companion. His trousers were secured at the waist by a strong leathern belt, and when he wore a coat in cold weather he generally had a revolver at his hip, but the weapon had not been discharged in years.

There were two members of that overland train whom Jeff never forgot. They were young children, Roswell and Edith Palmer, who lost both of their parents within five years after reaching the coast. Jeff proved the friend in need, and no father could have been kinder to the orphans, who were ten and twelve years younger than he.

Roswell Palmer was now married, with a son named for himself, while his sister, Mrs. Mansley, had been a widow a long time, and she, too, had an only son, Frank, who was a few months older than his cousin. The boys had received a good common-school education, but their parents were too poor to send them to college. Jeff would have offered to help but for his prejudice against all colleges. The small wages which the lads received as clerks in a leading dry-goods house were needed by their parents, and the youths, active, lusty, and ambitious, had settled down to the career of merchants, with the hoped-for reward a long, long way in the future.

One evening late in March, 1897, Jeff opened the door of Mr. Palmer's modest home, near the northern suburb of San Francisco, and with his pipe between his lips, sat down in the chair to which he was always welcome. In truth, the chair was considered his, and no one would have thought of occupying it when he was present. As he slowly puffed his pipe he swayed gently backward and forward, his slouch hat on the floor beside him, and his long, straggling hair dangling about his shoulders, while his heavy beard came almost to his eyes....