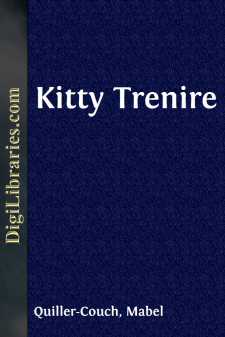 CHAPTER I. FATE AND A RUSTY NAIL.

On such an afternoon, when all the rest of the world lay in the fierce glare of the scorching sun, who could blame the children for choosing to perch themselves on the old garden wall, where it was so cool, and shady, and enticing? And who, as Kitty often asked tragically in the days and weeks that followed, could have known that by doing so "they were altering their fates for ever"?

The four of them talked a great deal in those days of their "fates;" it sounded so mysterious and grand, and so interesting too, for, of course, no one could know what lay in store for them all, and the most wonderful and surprising events might happen. They did happen to some people, and why not to them?

"I am quite sure something will happen to me some day," said Betty, with a very wise and serious look.

"I shouldn't be surprised," said Dan with mock seriousness, "if something did."

"I mean something wonderful, of course," added Betty. "Don't," with a superior air, "be silly, Dan. Things must happen to somebody, or there would never be any."

Later that same day they realized for the first time that small events could be interesting and important too, and that while they were thinking of their "fates" as something to be spun and woven in the mysterious future, the shuttle was already flying fast.

As I said before, the old wall was particularly cool and tempting-looking that sunny afternoon, for the high, untrimmed laurel hedge on the other side of the path behind them threw a deep broad shadow over the flat top of it, and shade was what one appreciated most on that hot day. All the ground in Gorlay sloped, for Gorlay was built on two hills, while the gardens of all the houses on either side sloped either up or down another and a steeper hill. Dr. Trenire's house was on the left-hand side of the street, as one walked up it, and it was the steep slope up of the garden behind it that made the old wall so fascinating.

To reach the garden from the house one had to pass through a cobbled yard, with the back wing of the house and a stable on one side of it, and a coach-house and another stable on the other. The garden and the garden wall were at the end. From the yard the wall ran up to a good height—to the children it seemed immense, as high as the tower of Babel, though were they to go back now and look at it I dare say they would find it quite insignificant, for walls have a curious way of decreasing an inch or two with every year one grows older.

To the children, though, its two chief charms were that it had a broad flat top on which one could sit and dangle one's legs over the abyss below, and that from the garden it was so low that by just walking over a flower-bed one could step right on to it, while from that eminence one could command a view of the back door, the side door, the stables, and all that went on in the yard. So that, in addition to being cool and shady, it really was a most attractive and alluring spot.

A vine with a wealth of pretty leaves and long graceful tendrils covered the front of the stable and side of the house, and some years there would be a few bunches of little green grapes hanging amongst the leaves....