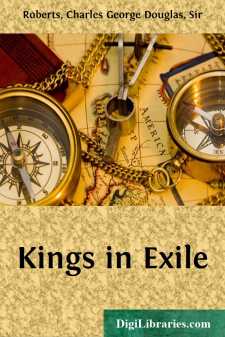 That was what two grim old sachems of the Dacotahs had dubbed him; and though his official title, on the lists of the Zoölogical Park, was “Kaiser,” the new and more significant name had promptly supplanted it. The Park authorities—people of imagination and of sentiment, as must all be who would deal successfully with wild animals—had felt at once that the name aptly embodied the tragedies and the romantic memories of his all-but-vanished race. They had felt, too, that the two old braves who had been brought East to adorn a city pageant, and who had stood gazing stoically for hours at the great bull buffalo through the barrier of the steel-wire fence, were fitted, before all others, to give him a name. Between him and them there was surely a tragic bond, as they stood there islanded among the swelling tides of civilization which had already engulfed their kindreds. “Last Bull” they had called him, as he answered their gaze with little, sullen, melancholy eyes from under his ponderous and shaggy front. “Last Bull”—and the passing of his race was in the name.

Here, in his fenced, protected range, with a space of grassy meadow, half a dozen clumps of sheltering trees, two hundred yards of the run of a clear, unfailing brook, and a warm shed for refuge against the winter storms, the giant buffalo ruled his little herd of three tawny cows, two yearlings, and one blundering, butting calf of the season. He was a magnificent specimen of his race—surpassing, it was said, the finest bull in the Yellowstone preserves or in the guarded Canadian herd of the North. Little short of twelve feet in length, a good five foot ten in height at the tip of his humped and huge fore-shoulders, he seemed to justify the most extravagant tales of pioneer and huntsman. His hind-quarters were trim and fine-lined, built apparently for speed, smooth-haired, and of a grayish lion-color. But his fore-shoulders, mounting to an enormous hump, were of an elephantine massiveness, and clothed in a dense, curling, golden-brown growth of matted hair. His mighty head was carried low, almost to the level of his knees, on a neck of colossal strength, which was draped, together with the forelegs down to the knees, in a flowing brown mane tipped with black. His head, too, to the very muzzle, wore the same luxuriant and sombre drapery, out of which curved viciously the keen-tipped crescent of his horns. Dark, huge, and ominous, he looked curiously out of place in the secure and familiar tranquillity of his green pasture.

For a distance of perhaps fifty yards, at the back of the pasture, the range of the buffalo herd adjoined that of the moose, divided from it by that same fence of heavy steel-wire mesh, supported by iron posts, which surrounded the whole range. One sunny and tingling day in late October—such a day as makes the blood race full red through all healthy veins—a magnificent stranger was brought to the Park, and turned into the moose-range.

The newcomer was a New Brunswick bull moose, captured on the Tobique during the previous spring when the snow was deep and soft, and purchased for the Park by one of the big Eastern lumber-merchants....