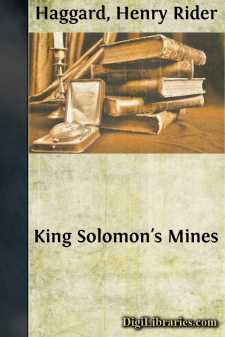 Add to My Favorites
Published: 8 years ago
Downloads: 62
Rating: (0 Votes)

Now that this book is printed, and about to be given to the world, a sense of its shortcomings both in style and contents, weighs very heavily upon me. As regards the latter, I can only say that it does not pretend to be a full account of everything we did and saw. There are many things connected with our journey into Kukuanaland that I should have liked to dwell upon at length, which, as it is, have been scarcely alluded to. Amongst these are the curious legends which I collected about the chain armour that saved us from destruction in the great battle of Loo, and also about the "Silent Ones" or Colossi at the mouth of the stalactite cave. Again, if I had given way to my own impulses, I should have wished to go into the differences, some of which are to my mind very suggestive, between the Zulu and Kukuana dialects. Also a few pages might have been given up profitably to the consideration of the indigenous flora and fauna of Kukuanaland.[1] Then there remains the most interesting subject—that, as it is, has only been touched on incidentally—of the magnificent system of military organisation in force in that country, which, in my opinion, is much superior to that inaugurated by Chaka in Zululand, inasmuch as it permits of even more rapid mobilisation, and does not necessitate the employment of the pernicious system of enforced celibacy. Lastly, I have scarcely spoken of the domestic and family customs of the Kukuanas, many of which are exceedingly quaint, or of their proficiency in the art of smelting and welding metals. This science they carry to considerable perfection, of which a good example is to be seen in their "tollas," or heavy throwing knives, the backs of these weapons being made of hammered iron, and the edges of beautiful steel welded with great skill on to the iron frames. The fact of the matter is, I thought, with Sir Henry Curtis and Captain Good, that the best plan would be to tell my story in a plain, straightforward manner, and to leave these matters to be dealt with subsequently in whatever way ultimately may appear to be desirable. In the meanwhile I shall, of course, be delighted to give all information in my power to anybody interested in such things.

And now it only remains for me to offer apologies for my blunt way of writing. I can but say in excuse of it that I am more accustomed to handle a rifle than a pen, and cannot make any pretence to the grand literary flights and flourishes which I see in novels—for sometimes I like to read a novel. I suppose they—the flights and flourishes—are desirable, and I regret not being able to supply them; but at the same time I cannot help thinking that simple things are always the most impressive, and that books are easier to understand when they are written in plain language, though perhaps I have no right to set up an opinion on such a matter. "A sharp spear," runs the Kukuana saying, "needs no polish"; and on the same principle I venture to hope that a true story, however strange it may be, does not require to be decked out in fine words....