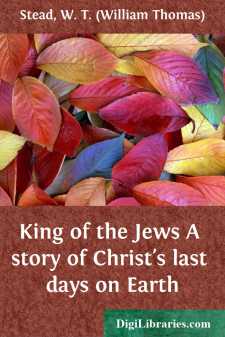 CHAPTER I. JESUS DRIVES OUT THE MONEY-CHANGERS.

Cast thyself down in adoring love,Race bowed down by the curse of God!Peace and grace out of Zion above!He is not wroth forever,Though his wrath be just—though uplifted his rod.Thus saith he, who changeth never:"I will not the death of a sinner—I will forgive—Let him live!"And he gave up his son the world from sin to free,Praise and thanks we give, Eternal, to thee!

Suddenly there was heard a noise of singing. A great multitude came pouring down the narrow street that runs past Pilate's house, chanting as they came, "Hail to thee, O Son of David!" Little children, old men and maidens ran forward, some raising palm branches, but all ever looking backward to one who should come. More and ever more streamed down the street into the open space in front of the temple, but still the Hosanna song went on.

The entry into Jerusalem.

At last, in the midst of the jubilant throng, Jesus appeared, clad in a long garment of gray, over which was cast a flowing robe. His face was composed and pensive. His long black hair and beard surrounded features somewhat swarthy from the rays of the hot sun, and he rode on the side of the ass's colt that seemed almost too small to support his weight.

John, the beloved disciple, dressed in green raiment with a red mantle, led the little ass, carrying in his hand a long pilgrim staff. The mob pressed tumultuously around, singing and crying: "Hosanna to the Son of David!" Jesus blessed them as he rode through their midst. After passing the house of Pilate he suddenly dismounted. Then Jesus advanced to the front of the temple. The hosannas died away as he contemplated the busy scene. There were the priests busily engaged with the money-changers. Nathanael, chief orator of the Sanhedrin, stood conspicuous among the chattering throng. There were baskets with pigeons for sale as sacrifices. There were the tables of the dealers. Buying and selling, haggling and bargaining were in full swing in the market-place.

For a moment Jesus, who was above the average height, and whose mien was dignified and commanding, stood as if amazed and indignant, then suddenly burst out upon the astonished throng of priests and merchants, with the following protest: "What see I here? Shall my Father's house be thus dishonored? Is this the house of God, or is it a market-place? How can the strangers who come from the land of the Gentiles to worship God perform their devotions in this tumult of usury? And you," he continued, advancing a step toward the priests, who stared at him in amazement, "You priests, guardians of the temple, can you see this abomination and permit it to continue? Woe be unto you! He who searches the heart knows why you encourage such disorder."

The crowd, silent now, watched with eager interest the money-changers and priests, who but imperfectly understanding what had been said to them, stared at the intruder.

"Who can this man be?" they asked.

And then from the lips of all the multitude there went up the simultaneous response, as if the whole throng had but one voice: "It is the great prophet from Nazareth, in Galilee!"

Jesus, then moving forward into the midst of the astonished merchants in the temple, exclaimed, in words of imperious authority: "Away with you from here, servants to Mammon!...