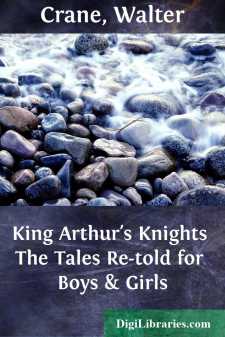 This book is an attempt to tell some of the stories of King Arthur and his Knights in a way which will be interesting to every boy and girl who loves adventures.

Although tales of these old British heroes have been published before in a form intended for young people, it is believed that they have never been related quite in the same spirit nor from the same point of view; and it is hoped that the book will fill a place hitherto vacant in the hearts of all boys and girls.

No doubt many of you, my young readers, have at some time or another taken down the Morte D'Arthur from your father's bookshelves and read a few pages of it here and there. But I doubt if any of you have ever gone very far in the volume. You found generally, I think, that it was written in a puzzling, old-fashioned language, that though it spoke of many interesting things, and seemed that it ought to be well worth reading, yet somehow it was tedious and dry.

In the tales as I have retold them for you, I hope you will not find any of these faults. Besides writing them in simple language, I have chosen only those episodes which I know would appeal to you. I have added or altered here and there, for in places it struck me that there was just wanting a word or two to make you feel the magic that was everywhere abroad in those days. It seemed to me that some mysterious adventure might easily be waiting in the ruined and deserted Roman town on the desolate moor, or even just round the mossy trunk of the next oak in the forest-drive, through which the knight was riding; or that any fair lady or questing dog which he might meet could turn out to be a wizard seeking to work woe upon him. Nevertheless, I was always sure that in those bright days when the world was young, whatever evil power might get the mastery for a little while, the knight's courage, humility, and faith would win through every peril at the end.

In this book, besides reading of wonderful adventures and brave fighting, you will learn just what sort of man a perfect knight was required to be in the chivalrous times when men wore armour and rode on errantry. The duties of a 'good and faithful knight' were quite simple, but they were often very hard to perform. They were—to protect the distressed, to speak the truth, to keep his word to all, to be courteous and gentle to women, to defend right against might, and to do or say nothing that should sully the fair name of Christian knighthood.

Although, therefore, these stories of King Arthur and his men treat of knights and their ladies, of magical trolls and wonder-working wizards, and it might seem for that reason that they can have little or nothing in common with life of the present day, it will be seen that the spirit in which they are told conveys something which every boy can learn.

Indeed, the great and simple lesson of chivalry which the tales of King Arthur teach is, in a few words, to merit 'the fine old name of gentleman.'

The history of King Arthur and his Knights is contained in two books, one being the Morte D'Arthur, written by Sir Thomas Malory, the other being the Mabinogion, a collection of old Welsh stories, first translated by Lady Charlotte Guest in 1838....