King Alfred's Viking A Story of the First English Fleet 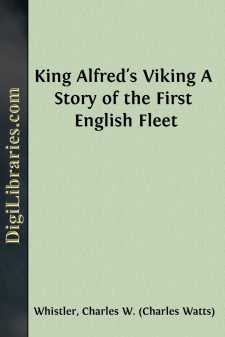 Chapter I. The Seeking of Sword Helmbiter.

Men call me "King Alfred's Viking," and I think that I may be proud of that name; for surely to be trusted by such a king is honour enough for any man, whether freeman or thrall, noble or churl. Maybe I had rather be called by that name than by that which was mine when I came to England, though it was a good title enough that men gave me, if it meant less than it seemed. For being the son of Vemund, king of Southmereland in Norway, I was hailed as king when first I took command of a ship of my own. Sea king, therefore, was I, Ranald Vemundsson, but my kingdom was but over ship and men, the circle of wide sea round me was nought that I could rule over, if I might seem to conquer the waves by the kingship of good seaman's craft.

One may ask how I came to lose my father's kingdom, which should have been mine, and at last to be content with a simple English earldom; or how it was that a viking could be useful to Alfred, the wise king. So I will tell the first at once, and the rest may be learned from what comes after.

If one speaks to me of Norway, straightway into my mind comes the remembrance of the glare of a burning hall, of the shouts of savage warriors, and of the cries of the womenfolk, among whom I, a ten-year-old boy, was when Harald Fairhair sent the great Jarl Rognvald and his men to make an end of Vemund, my father. For Harald had sworn a great oath to subdue all the lesser kings in the land and rule there alone, like Gorm in Denmark and Eirik in Sweden. So my father's turn came, and as he feasted with his ninety stout courtmen, the jarl landed under cover of the dark and fell on him, surrounding the house and firing it. Then was fierce fighting as my father and his men sallied again and again from the doors and were driven back, until the high roof fell in and there was a sudden silence, and an end.

Then in the silence came my mother's voice from where she stood on the balcony of the living house across the garth . I mind that she neither wept nor shrieked as did the women round her, and her voice was clear and strong over the roaring of the flames. I mind, too, the flash of helms and armour as every man turned to look on her who spoke.

"Coward and nidring art thou, Rognvald, who dared not meet Vemund, my husband, in open field, but must slay him thus. Ill may all things go with thee, till thou knowest what a burning hall is like for thyself. I rede thee to the open hillside ever, rather than come beneath a roof; for as thou hast wrought this night, so shall others do to thee."

Then rose a growl of wrath from Rognvald's men, but the great Jarl bade them cease, and harm none in all the place. So he went down to his ships with no more words and men said that he was ill at ease and little content, for he had lost as many men as he had slain, so stoutly fought my father and our courtmen, and had earned a curse, moreover, which would make his nights uneasy for long enough.

Then as he went my mother bade me look well at him, that in days to come I might know on whom to avenge my father's death....