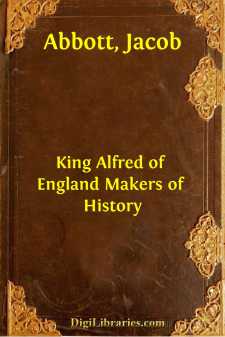 Chapter I. The Britons.

Alfred the Great figures in history as the founder, in some sense, of the British monarchy. Of that long succession of sovereigns who have held the scepter of that monarchy, and whose government has exerted so vast an influence on the condition and welfare of mankind, he was not, indeed, actually the first. There were several lines of insignificant princes before him, who governed such portions of the kingdom as they individually possessed, more like semi-savage chieftains than English kings. Alfred followed these by the principle of hereditary right, and spent his life in laying broad and deep the foundations on which the enormous superstructure of the British empire has since been reared. If the tales respecting his character and deeds which have come down [page 14] to us are at all worthy of belief, he was an honest, conscientious, disinterested, and far-seeing statesman. If the system of hereditary succession would always furnish such sovereigns for mankind, the principle of loyalty would have held its place much longer in the world than it is now likely to do, and great nations, now republican, would have been saved a vast deal of trouble and toil expended in the election of their rulers.

Although the period of King Alfred's reign seems a very remote one as we look back toward it from the present day, it was still eight hundred years after the Christian era that he ascended his throne. Tolerable authentic history of the British realm mounts up through these eight hundred years to the time of Julius Cæsar. Beyond this the ground is covered by a series of romantic and fabulous tales, pretending to be history, which extend back eight hundred years further to the days of Solomon; so that a much longer portion of the story of that extraordinary island comes before than since the days of Alfred. In respect, however to all that pertains to the interest and importance of the narrative, the exploits and the arrangements of Alfred are the beginning.

The histories, in fact, of all nations, ancient and modern, run back always into misty regions of romance and fable. Before arts and letters arrived at such a state of progress as that public events could be recorded in writing, tradition was the only means of handing down the memory of events from generation to generation; and tradition, among semi-savages, changes every thing it touches into romantic and marvelous fiction.

The stories connected with the earliest discovery and settlement of Great Britain afford very good illustrations of the nature of these fabulous tales. The following may serve as a specimen:

At the close of the Trojan war, Æneas retired with a company of Trojans, who escaped from the city with him, and, after a great variety of adventures, which Virgil has related, he landed and settled in Italy. Here, in process of time, he had a grandson named Silvius, who had a son named Brutus, Brutus being thus Æneas's great-grandson.

One day, while Brutus was hunting in the forests, he accidentally killed his father with [page 16] an arrow....