Kilgorman A Story of Ireland in 1798 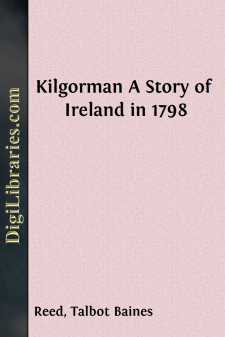 By the death of Talbot B. Reed the boys of the English-speaking world have lost one of their best friends. For fourteen years he has contributed to their pleasure, and in the little library of boys’ books which left his pen he has done as much as any writer of our day to raise the standard of boys’ literature. His books are alike removed from the old-fashioned and familiar class of boys’ stories, which, meaning well, generally baffled their own purpose by attempting to administer morality and doctrine on what Reed called the “powder-in-jam” principle—a process apt to spoil the jam, yet make “the powder” no less nauseous; or, on the other hand, the class of book that dealt in thrilling adventure of the blood-curdling and “penny dreadful” order. With neither of these types have Talbot Reed’s boys’ books any kinship. His boys are of flesh and blood, such as fill our public schools, such as brighten or “make hay” of the peace of our homes. He had the rare art of hitting off boy-nature, with just that spice of wickedness in it without which a boy is not a boy. His heroes have always the charm of bounding, youthful energy, and youth’s invincible hopefulness, and the constant flow of good spirits which have made the boys of all time perennially interesting.

The secret of Reed’s success in this direction was that all through life, as every one who had the privilege of knowing him can testify, he possessed in himself the healthy freshness of heart of boyhood. He sympathised with the troubles and joys, he understood the temptations, and fathomed the motives that sway and mould boy-character; he had the power of depicting that side of life with infinite humour and pathos, possible only to one who could place himself sympathetically at the boys’ stand-point in life. Hence the wholesomeness of tone and the breezy freshness of his work. His boy-heroes are neither prigs nor milk-sops, but in their strength and weakness they are the stuff which ultimately makes our best citizens and fathers; they are the boys who, later in life, with healthy minds in healthy bodies, have made the British Empire what it is.

A special and pathetic interest attaches to this story of “Kilgorman,” the last that left Talbot Reed’s pen. It was undertaken while he was yet in the prime of his strength and vigour. The illness which ultimately, alas, ended fatally had already laid hold on him ere he had well begun the book. In intervals of ease during his last illness he worked at it, sometimes in bed, sometimes in his armchair: it is pleasant to think that he so enjoyed the work that its production eased and soothed many a weary hour for him, and certainly never was other than a recreation to him.

The pen dropped from his hand ere he had quite completed the work, yet, as the book stands here, it is much as he meant to leave it. The figures of Barry Gallagher, and Tim, and the charming Kit will take their places in the delightful gallery of his young people, and their adventures by land and by sea will be followed with an increased interest that they are the last that can come from his brilliant pen....