Kidnapped at the Altar or, The Romance of that Saucy Jessie Bain 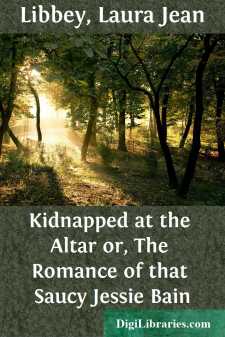 SOME YOUNG GIRLS FIND LOVE SO SWEET; TO OTHERS IT PROVES A CURSE.

It was a magnificent evening, in balmy June, on the far-famed St. Lawrence.

The steamer "St. Lawrence" was making her nightly search-light excursion down the bay, laden to her utmost capacity.

The passengers were all summer tourists, light of heart and gay of speech; all save one, Hubert Varrick, a young and handsome man, dressed in the height of fashion, who held aloof from the rest, and who stood leaning carelessly against the taffrail.

The steamer was making its way in and out of the thousand green isles, the great light from the pilot-house suddenly throwing a broad, illuminating flash first on this and then on that.

As the light swept across land and water from point to point, Varrick lightly laughed aloud at the ludicrous incidents, such as the sudden flashing of the light's piercing rays on some lover's nook, where two souls indulging in but one thought were ruthlessly awakened from sweet seclusion to the most glaring publicity, and at many a novel sight, little dreaming that at every turn of the ponderous wheels he was nearing his destiny.

"Where are we now?" he inquired of a deck-hand.

The words had scarcely left his lips ere a radiant flood of electric light swept over the jutting bit of mainland. In that instantaneous white glare Varrick saw a sight that was indelibly engraved upon his memory while life lasted.

The dock was deserted by all save one person—a young girl, waving her hand toward the steamer.

She wore a dress of some white, fleecy material, her golden hair flying in the wind, and flapping against her bare shoulders and half-bared white arms.

"Great heavens! who is that?" Varrick cried.

But as he strained his eyes eagerly toward the beautiful picture, the scene was suddenly wrapped in darkness, and the steamer glided on.

"Who was that, and what place was it?" he asked again.

"It was Fisher's Landing, I said," rejoined the other. "The girl is 'Saucy Jessie Bain,' as they call her hereabouts. She's Captain Carr's niece."

"Has she a lover?" suddenly asked Varrick.

"Lord bless you, sir!" he answered, "there's scarcely a single man for miles around that isn't in love with Jessie Bain; but she will have none of them.

"There's a little story about Jessie Bain. I'll tell it to you, since you admire the girl."

But the story was not destined to become known to Varrick, for his companion was called away at that moment.

He could think of nothing else, see nothing but the face of the girl he had seen on the dock at Fisher's Landing.

This was particularly unfortunate, for at that moment Hubert Varrick was on his way to be married on the morrow to the beautiful heiress, Miss Northrup.

She was a famous beauty and belle, and Varrick had been madly in love with her. But since he had seen the face of Jessie Bain he felt a strange, half-defined regret that he was bound to another. He was not over-impatient to arrive at his destination, although he knew that Gerelda Northrup and a bevy of her girl friends would undoubtedly be at the dock to welcome him....