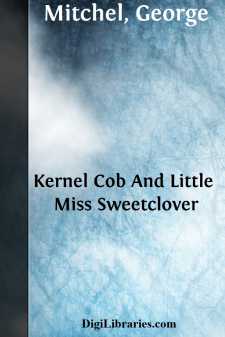 Jackie was a little boy and he had a little sister named Peggs, and they lived with their Aunt who was very old, maybe thirty-two.

And it was so very long since she had been a little girl, that she quite forgot that children need toys to play with and all that.

So poor little Jackie and Peggs had no soldiers or dolls but could only play at make-believe all day long.

And once, when they were making pies in the garden, Peggs began to cry and Jackie ran and put his arms about her, for he loved his little Peggs very dearly; and he said to her:

"What's the matter, Peggsie? Did a spider bite you?"

"Was it a naughty worm?"

"It weren't anything that bit me, only I want a doll," and away she cried again.

"Huh!" says Jackie, "that's nothing. You don't want a doll any mor'n I want a soldier," and he sat down beside her and began to cry, too.

And after they had cried for a long time, maybe four hours or two, they stopped.

"I tell you what!" says Jackie.

"What?" says Peggs, drying her eyes on her pinafore.

"You bet," says Jackie, and he slapped one of his legs the way sailors do in tales of the sea.

"What'll we make it of?" asked Peggs.

And they went in search of the things they would make the dolls of. And pretty soon, Peggs made the most wonderful doll of flowers that ever a child could see.

The head was of Sweetclover, the dress was a purple morning-glory turned upside-down so it looked like a bodice and a skirt, and it was tied to the head so that they wouldn't come apart. And perched on the top of the head was a little bonnet, only it wasn't really a bonnet, you know, but a little four o'clock.

And she called it Little Miss Sweetclover and it was the dearest little doll and as fresh as the morning dew.

In the meantime, Jackie had been busy, you may be sure; but he couldn't find anything to make a soldier of except sticks of wood, but he had no jack-knife, much as he had always wanted one.

"Whatever shall I do?" thought Jackie, as he looked about the garden, and just then he saw an ear of corn and he picked it up.

"Maybe this will do," and he picked all the kernels off except two for the eyes, one for the nose, two more for the ears and a row for the teeth.

And he ran to Peggs to have her sew some clothes for his soldier.

"What do you think of Little Miss Sweetclover?" says Peggs, holding it up for Jackie to see.

"I think she's very pretty," says Jackie, "only she needs legs." And while Peggs cut out and sewed a uniform for the soldier, Jackie went in search of legs for Sweetclover....