Kept in the Dark 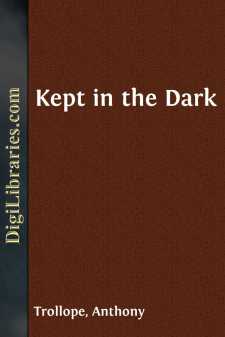 CECILIA HOLT AND HER THREE FRIENDS.

There came an episode in the life of Cecilia Holt which it is essential should first be told. When she was twenty-two years old she was living with her mother at Exeter. Mrs. Holt was a widow with comfortable means,—ample that is for herself and her daughter to supply them with all required by provincial comfort and provincial fashion. They had a house without the city, with a garden and a gardener and two boys, and they kept a brougham, which was the joint care of the gardener and the boy inside and the boy outside. They saw their friends and were seen by them. Once in the year they left home for a couple of months and went,—wherever the daughter wished. Sometimes there was a week or two in London; sometimes in Paris or Switzerland. The mother seemed to be only there to obey the daughter's behests, and Cecilia was the most affectionate of masters. Nothing could have been less disturbed or more happy than their lives. No doubt there was present in Cecilia's manner a certain looking down upon her mother,—of which all the world was aware, unless it was her mother and herself. The mother was not blessed by literary tastes, whereas Cecilia was great among French and German poets. And Cecilia was æsthetic, whereas the mother thought more of the delicate providing of the table. Cecilia had two or three female friends, who were not quite her equals in literature but nearly so. There was Maude Hippesley, the Dean's daughter, and Miss Altifiorla, the daughter of an Italian father who had settled in Exeter with her maternal aunt,—in poor circumstances, but with an exalted opinion as to her own blood. Francesca Altifiorla was older than her friend, and was, perhaps, the least loved of the three, but the most often seen. And there was Mrs. Green, the Minor Canon's wife, who had the advantage of a husband, but was nevertheless humble and retiring. They formed the élite of Miss Holt's society and were called by their Christian names. The Italian's name was Francesca and the married lady was called Bessy.

Cecilia had no lovers till there came in an evil hour to Exeter one Sir Francis Geraldine. She had somewhat scoffed at love, or at the necessity of having a lover. She and Miss Altifiorla had been of one mind on that subject. Maude Hippesley had a lover and could not be supposed to give her accord. Mrs. Green had had one, but expressed an opinion that it was a trouble well over. A husband might be a comfort, but a lover was a "bother." "It's such a blessing to be able to wear my old gloves before him. He doesn't mind it now as he knows he'll have to pay for the new." But at length there came the lover. Sir Francis Geraldine was a man who had property in the county but had not lately lived upon it. He was of an old family, of which he was very proud. He was an old baronet, a circumstance which he seemed to think was very much in his favour. Good heavens! From what a height did he affect to look down upon the peers of the last twenty years. His property was small, but so singular were his gifts that he was able to be proud of that also....