Kathay: A Cruise in the China Seas 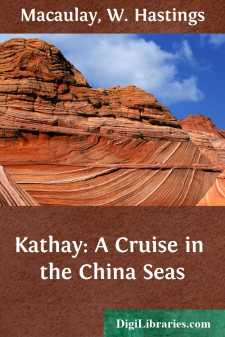 Immediately after noon, upon the 29th day of January, 1850, we east off from the wharf at the Navy Yard in Charlestown, Massachusetts, and with the pilot on board, proceeded to sea. But little time was allowed to send our adieus, for he soon left us, bearing with him some hasty scrawls, to the illegibility of one of which a very good friend of the writer can testify. Our commander was very anxious to commence his cruise, and having been delayed nearly one month for officers, put off upon it as soon as the last gentleman had reported.

That bugbear to all landsmen,—sea-sickness,—gave me but little annoyance, although some of the crew appeared to suffer greatly from its effects.

Having a favorable wind we soon made a good offing, a very desirable thing at that season of the year, and indeed one which no sailor objects to on any coast, when outward bound; a fresh, favoring breeze and plenty of sea room being his most fervent prayer.

Our first destination was Rio, and towards it we bent our course. A few days out, and the novelty of our situation having worn off, pleasing remembrances of persons, localities, and particular events which had occurred during our sojourn in Boston, became less frequent, and pretty allusions to "again standing upon the deck," poetical petitions to the dark blue Ocean, praying it, in the language of Byron, to "roll on," gradually gave way to growlings, when old Neptune, as if in answer, drove his chariot over its surface, and working its waters into a yeasty foam, disturbed, at the same time, both our equilibrium and equanimity.

But little occurred to destroy the usual monotony of a sea voyage. At long intervals "sail ho!" would be called out by the lookout on the foretopsail yard, and after a time our eyes would be greeted from the deck with the sight of another white-winged wanderer like ourself, steering for his distant port. Then would come conjecture as to whither he might be bound, and sailor-like reflections upon his rig, qualities of sailing, and the judgment of the skipper in the selection of his course.

Our reckoning, and the change of temperature both of air and water, soon announced that we were approaching that equatorial divider of our globe, called "the Line," and in about one degree of latitude above it (1° 16' N.) we made the islets of Saint Paul, a barren pile of rocks of about one mile and a half in length, and of inconsiderable breadth, standing solitarily and desolately here in mid ocean. Made their longitude by the mean of three chronometers; observation 29° 19' 57'' west; about one degree different from the longitude in which they were laid down in our chart; an error which should be corrected.

It was here that a few years ago a Dutch East Indiaman was wrecked, and of nearly two hundred souls but three or four were saved, and these were taken off after remaining upon the rocks some twelve days, without nourishment and exposed to all the horrors of starvation. Worse yet than that, deprived of shelter from a vertical sun, without water to restore the fluids which his fierce rays extracted from their parching bodies. An immense number of birds were flying over and around these jagged peaks, and who knows how greatly these may have added to the torture of the shipwrecked crew, when failing nature denied the power to protect themselves.

"Ah who can tellThe looks men cast on famished men;The thoughts that came up there."

In the morning watch of the twenty-sixth of February, we "crossed the line" in longitude 29° 56' 50'' west, with such light breezes, that at meridian we had logged but 30' south....