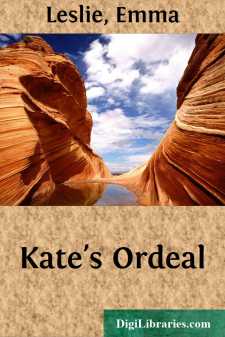 CHAPTER I. THE MESSAGE.

o you think Katie Haydon is pretty—I don't?" and the speaker glanced at her own bright curls as she spoke.

"Well, I don't know whether she is exactly pretty, but she always looks nice, and then she is so pleasant and merry, and——"

"And so vain and stuck-up," put in the first speaker again.

"Oh, how can you say so?" said another, a plain, quiet-looking girl, who had not spoken before. "Mother says she would make such a nice nurse-maid; so quiet and bright as she is, children would be sure to take to her."

"Well, I don't know so much about that, Mary, but I know she has asked teacher about a situation—her mother wants her to go into the nursery."

"My mother wants me to do the same," said quiet Mary Green, "but although I have spoken to teacher I do not expect to hear of anything until Katie is suited, for she asked first, and people are sure to choose her in preference to me." This was said without the least touch of envy or jealousy. Before anyone could reply to it, Katie herself joined the group. "Are we not late?" she said, breathless with her run to catch them before they reached the school. "I have some news for you. What do you think—I am going to London!" she panted, fanning herself with her pocket-handkerchief, and casting a triumphant glance at Esther Odell, the girl who had called her proud and stuck-up. Esther was always talking about going to London, and saying disparaging things of going to service—servants were vulgar and despised and she never would be a servant, though her mother and father both said she ought to get a situation. This was how Esther had talked, and it gave Kate Haydon no small pleasure to be able to come and tell her schoolfellow that she was going to the wonderful city first.

"Is it settled, Katie?" asked Mary. "Have you got a situation—are you going to service?"

Katie shook her head. "I am going to serve in a shop. My cousin has got a nice place at a baker's and confectioner's, and they want somebody to help her, and she has written to me about it."

"What a lucky girl you are!" exclaimed Esther, in a tone of envy. "It does seem hard, too, for that is just the kind of situation I want, and I daresay you would have been as well pleased if it had been in the nursery."

"My mother would have liked it better, I do believe," laughed Katie, "for she seems half afraid to let me go to London, and serve in a shop too!"

"Here comes teacher!" said Mary Green, and the conversation was dropped, as the girls hurried forward to meet the lady.

They went into school together, and in the bustle of getting their seats, Miss Eldon whispered to Kate, "Will you ask your mother to come and see me to-morrow morning, Kate?"

"Yes, ma'am," answered the girl, wondering not a little what her teacher could want to see her mother about—quite forgetting the request she had made to the lady a few weeks before. The lesson for that Sunday afternoon was about the honour and dignity of work and service, for the lady knew that some of her class had adopted the foolish notions of Esther Odell, and did not fail to bring forward this subject whenever she had the opportunity, pointing out how God had made it necessary for all to work and serve their fellow-men....