Kate Carnegie and Those Ministers 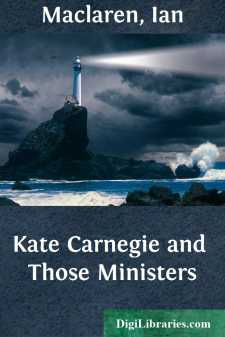 t was the morning before the Twelfth, years ago, and nothing like unto Muirtown Station could have been found in all the travelling world. For Muirtown, as everybody knows, is the centre which receives the southern immigrants in autumn, and distributes them, with all their belongings of servants, horses, dogs, and luggage, over the north country from Athole to Sutherland. All night, express trains, whose ordinary formation had been reinforced by horse boxes, carriage trucks, saloons and luggage vans, drawn by two engines, and pushed up inclines by a third, had been careering along the three iron trunk roads that run from London to the North. Four hours ago they had forced the border, that used to be more jealously guarded, and had begun to converge on their terminus. Passengers, awakened by the caller air and looking out still half asleep, miss the undisciplined hedgerows and many-shaped patches of pasture, the warm brick homesteads and shaded ponds of the south. Square fields cultivated up to a foot of the stone dykes or wire-fencing, the strong grey-stone farm-houses, the swift-running burns, and the never-distant hills, brace the mind. Local passengers come in with deliberation, whose austere faces condemn the luxurious disorder of night travel, and challenge the defence of Arminian doctrine. A voice shouts "Carstairs Junction," with a command of the letter r, which is the bequest of an unconquerable past, and inspires one with the hope of some day hearing a freeborn Scot say "Auchterarder." The train runs over bleak moorlands with black peat holes, through alluvial straths yielding their last pickle of corn, between iron furnaces blazing strangely in the morning light, at the foot of historical castles built on rocks that rise out of the fertile plains, and then, after a space of sudden darkness, any man with a soul counts the ten hours' dust and heat but a slight price for the sight of the Scottish Rhine flowing deep, clear, and swift by the foot of its wooded hills, and the "Fair City" in the heart of her meadows.

"Do you see the last wreath of mist floating off the summit of the hill, and the silver sheen of the river against the green of the woods? Quick, dad," and the General, accustomed to obey, stood up beside Kate for the brief glimpse between the tunnel and a prison. Yet they had seen the snows of the Himalayas, and the great river that runs through the plains of India. But it is so with Scottish folk that they may have lived opposite the Jungfrau at Mürren, and walked among the big trees of the Yosemite Valley, and watched the blood-red afterglow on the Pyramids, and yet will value a sunset behind the Cuchullin hills, and the Pass of the Trossachs, and the mist shot through with light on the sides of Ben Nevis, and the Tay at Dunkeld—just above the bridge—better guerdon for their eyes.

"Ay, lassie"—the other people had left at Stirling, and the General fell back upon the past—"there 's just one bonnier river, and that's the Tochty at a bend below the Lodge, as we shall see it, please God, this evening."

"Tickets," broke in a voice with authority....