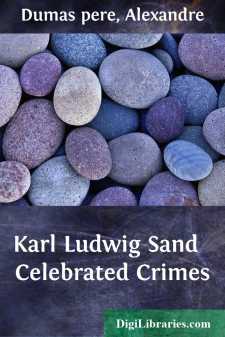 On the 22nd of March, 1819, about nine o'clock in the morning, a young man, some twenty-three or twenty-four years old, wearing the dress of a German student, which consists of a short frock-coat with silk braiding, tight trousers, and high boots, paused upon a little eminence that stands upon the road between Kaiserthal and Mannheim, at about three-quarters of the distance from the former town, and commands a view of the latter. Mannheim is seen rising calm and smiling amid gardens which once were ramparts, and which now surround and embrace it like a girdle of foliage and flowers. Having reached this spot, he lifted his cap, above the peak of which were embroidered three interlaced oak leaves in silver, and uncovering his brow, stood bareheaded for a moment to feel the fresh air that rose from the valley of the Neckar. At first sight his irregular features produced a strange impression; but before long the pallor of his face, deeply marked by smallpox, the infinite gentleness of his eyes, and the elegant framework of his long and flowing black hair, which grew in an admirable curve around a broad, high forehead, attracted towards him that emotion of sad sympathy to which we yield without inquiring its reason or dreaming of resistance. Though it was still early, he seemed already to have come some distance, for his boots were covered with dust; but no doubt he was nearing his destination, for, letting his cap drop, and hooking into his belt his long pipe, that inseparable companion of the German Borsch, he drew from his pocket a little note-book, and wrote in it with a pencil: "Left Wanheim at five in the morning, came in sight of Mannheim at a quarter-past nine." Then putting his note-book back into his pocket, he stood motionless for a moment, his lips moving as though in mental prayer, picked up his hat, and walked on again with a firm step towards Mannheim.

This young Student was Karl-Ludwig Sand, who was coming from Jena, by way of Frankfort aid Darmstadt, in order to assassinate Kotzebue.

Now, as we are about to set before our readers one of those terrible actions for the true appreciation of which the conscience is the sole judge, they must allow us to make them fully acquainted with him whom kings regarded as an assassin, judges as a fanatic, and the youth of Germany as a hero. Charles Louis Sand was born on the 5th of October, 1795, at Wonsiedel, in the Fichtel Wald; he was the youngest son of Godfrey Christopher Sand, first president and councillor of justice to the King of Prussia, and of Dorothea Jane Wilheltmina Schapf, his wife. Besides two elder brothers, George, who entered upon a commercial career at St, Gall, and Fritz, who was an advocate in the Berlin court of appeal, he had an elder sister named Caroline, and a younger sister called Julia.

While still in the cradle he had been attacked by smallpox of the most malignant type. The virus having spread through all his body, laid bare his ribs, and almost ate away his skull. For several months he lay between life and death; but life at last gained the upper hand....