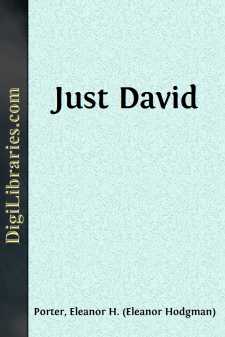 CHAPTER I THE MOUNTAIN HOME

Far up on the mountain-side stood alone in the clearing. It was roughly yet warmly built. Behind it jagged cliffs broke the north wind, and towered gray-white in the sunshine. Before it a tiny expanse of green sloped gently away to a point where the mountain dropped in another sharp descent, wooded with scrubby firs and pines. At the left a footpath led into the cool depths of the forest. But at the right the mountain fell away again and disclosed to view the picture David loved the best of all: the far-reaching valley; the silver pool of the lake with its ribbon of a river flung far out; and above it the grays and greens and purples of the mountains that climbed one upon another's shoulders until the topmost thrust their heads into the wide dome of the sky itself.

There was no road, apparently, leading away from the cabin. There was only the footpath that disappeared into the forest. Neither, anywhere, was there a house in sight nearer than the white specks far down in the valley by the river.

Within the shack a wide fireplace dominated one side of the main room. It was June now, and the ashes lay cold on the hearth; but from the tiny lean-to in the rear came the smell and the sputter of bacon sizzling over a blaze. The furnishings of the room were simple, yet, in a way, out of the common. There were two bunks, a few rude but comfortable chairs, a table, two music-racks, two violins with their cases, and everywhere books, and scattered sheets of music. Nowhere was there cushion, curtain, or knickknack that told of a woman's taste or touch. On the other hand, neither was there anywhere gun, pelt, or antlered head that spoke of a man's strength and skill. For decoration there were a beautiful copy of the Sistine Madonna, several photographs signed with names well known out in the great world beyond the mountains, and a festoon of pine cones such as a child might gather and hang.

From the little lean-to kitchen the sound of the sputtering suddenly ceased, and at the door appeared a pair of dark, wistful eyes.

"Daddy!" called the owner of the eyes.

There was no answer.

"Father, are you there?" called the voice, more insistently.

From one of the bunks came a slight stir and a murmured word. At the sound the boy at the door leaped softly into the room and hurried to the bunk in the corner. He was a slender lad with short, crisp curls at his ears, and the red of perfect health in his cheeks. His hands, slim, long, and with tapering fingers like a girl's, reached forward eagerly.

"Daddy, come! I've done the bacon all myself, and the potatoes and the coffee, too. Quick, it's all getting cold!"

Slowly, with the aid of the boy's firm hands, the man pulled himself half to a sitting posture. His cheeks, like the boy's, were red—but not with health. His eyes were a little wild, but his voice was low and very tender, like a caress.