Joyce of the North Woods 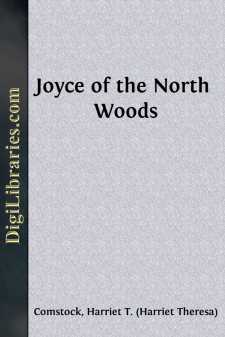 Fifty years before this story began, St. Angé was a lumber camp; the first gash in that part of the great Solitude to the north, which lay across Beacon Hill, three miles from Hillcrest.

When the splendid lumber had been felled within a prescribed limit, Industry took another leap, left St. Angé scarred and blighted, with a fringe of forest north and south, and struck camps farther back and nearer Canada.

Then Nature began to heal the stricken heart of the Solitude. A second growth of lovely tree and bush sprang to the call, and the only reminders of the camp were the absences of the men during the logging season, and the roaring and rushing of the river through Long Meadow every spring, with its burden of logs from the distant camps.

In the beginning St. Angé had had her aspirations. A futile highway had been constructed, for no other purpose apparently, than to connect the north and south forests. A little church had been built—there had never been any regular service held in it—and a small school-house which promptly degenerated into the Black Cat Tavern, General Store, and Post Office. A few modest houses met the highway face to face; a few more turned their backs upon it and were content with an outlook across Long Meadow and toward Beacon Hill, beyond which lay the village of Hillcrest which grew in importance as St. Angé degenerated. There were scattered houses among the clumps of maple and pine growths, and there was a forlorn railroad station before which a rickety, single track branch ended. Sometime during the day a train came in, and after an uncertain period it departed; it was the only link with the outer world that St. Angé had except what came by way of Hillcrest.

Toward Hillcrest, as the years went on, there grew in St. Angé a feeling of envy and distrust. Its prosperity and decency were a reflection, its very emphatic regard for law and order a menace and burden. St. Angéans sent their aspiring youths to the Hillcrest school—it was never an alarming constituency—it was cheaper to do that than to support a school of their own. There were emergencies when the Hillcrest doctor and minister were in demand, so it behooved St. Angé to keep up a partial show of friendliness, but bitterly did it resent the interference of Hillcrest justice during that season immediately following the enforced sobriety and isolation of the lumber camp.

Were men not to have some compensation for the hardships of the backwoods?

And just at that point in the argument Beacon Hill received its name and significance. From its top a watcher could view the road leading to Hillcrest, and by a well-directed signal give warning to any chance wrongdoer on the St. Angé side. Many a culprit had thus been aided in his plans of escape before Justice, striding over the western hill, bore down upon the town.

Beautiful, unappreciated St. Angé! The trees grew, and the scar was healed....