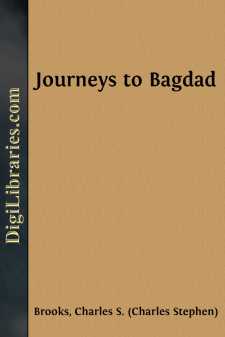 Are you of that elect who, at certain seasons of the year—perhaps in March when there is timid promise of the spring or in the days of October when there are winds across the earth and gorgeous panic of fallen leaves—are you of that elect who, on such occasion or any occasion else, feel stirrings in you to be quit of whatever prosy work is yours, to throw down your book or ledger, or your measuring tape—if such device marks your service—and to go forth into the world?

I do count myself of this elect. And I will name such stimuli as most set these stirrings in me. And first of all there is a smell compounded out of hemp and tar that works pleasantly to my undoing. Now it happens that there is in this city, down by the river where it flows black with city stain as though the toes of commerce had been washed therein, a certain ship chandlery. It is filthy coming on the place, for there is reek from the river and staleness from the shops—ancient whiffs no wise enfeebled by their longevity, Nestors of their race with span of seventy lusty summers. But these smells do not prevail within the chandlery. At first you see nothing but rope. Besides clothesline and other such familiar and domestic twistings, there are great cordages scarce kinsmen to them, which will later put to sea and will whistle with shrill enjoyment at their release. There are such hooks, swivels, blocks and tackles, such confusion of ships’ devices as would be enough for the building of a sea tale. It may be fancied that here is Treasure Island itself, shuffled and laid apart in bits like a puzzle-picture. (For genius, maybe, is but a nimbleness of collocation of such hitherto unconsidered trifles.) Then you will go aloft where sails are made, with sailormen squatting about, bronzed fellows, rheumatic, all with pipes. And through all this shop is the smell of hemp and tar.

In finer matters I have no nose. It is ridiculous, really, that this very messenger and forerunner of myself, this trumpeter of my coming, this bi-nasal fellow in the crow’s-nest, should be so deficient. If smells were bears, how often I would be bit! My nose may serve by way of ornament or for the sniffing of the heavier odors, yet will fail in the nice detection of the fainter waftings and olfactory ticklings. Yet how will it dilate on the Odyssean smell of hemp and tar! And I have no explanation of this, for I am no sailor. Indeed, at sea I am misery itself whenever perchance “the ship goes wop (with a wiggle between).” Such wistful glances have I cast upon the wide freedom of the decks when I leave them on the perilous adventure of dinner! So this relish of hemp and tar must be a legacy from a far-off time—a dim atavism, to put it as hard as possible—for I seem to remember being told that my ancestors were once engaged in buccaneering or other valiant livelihood.

But here is a peculiar thing. The chandlery gives me no desire to run away to sea. Rather, the smell of the place urges me indeterminately, diffusedly, to truantry. It offers me no particular chart. It but cuts my moorings for whatever winds are blowing. If there be blood of a pirate in me, it is a shame what faded juice it is. It would flow pink on the sticking. In mean contrast to skulls, bowie-knives and other red villainy, my thoughts will be set toward the mild truantry of trudging for an afternoon in the country. Or it is likely that I’ll carry stones for the castle that I have been this long time building....