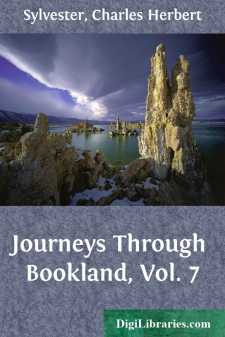 I wandered lonely as a cloudThat floats on high o’er vales and hills,When all at once I saw a crowd,—A host of golden daffodilsBeside the lake, beneath the trees,Fluttering and dancing in the breeze.

Continuous as the stars that shineAnd twinkle on the Milky Way,They stretched in never-ending lineAlong the margin of a bay:Ten thousand saw I, at a glance,Tossing their heads in sprightly dance.

For oft, when on my couch I lie,In vacant or in pensive mood,They flash upon that inward eyeWhich is the bliss of solitude;And then my heart with pleasure fills,And dances with the daffodils.

A HOST OF GOLDEN DAFFODILS

When we look at this little poem we see at a glance that the stanzas are all the same length, that the rhyme scheme is ababcc (see “To My Infant Son,” Vol. VI), and that the indentation at the beginning of the lines corresponds with the rhymes. This poem, then, is perfectly regular in form.

There are other things, however, which go to make up perfect structure in a poem. First and foremost, the words are so arranged that the accented syllables in any given line come at regular intervals. Take, for instance, the first two lines of this poem. Each line contains eight syllables. If you number these syllables 1, 2, 1, 2, 1, 2, 1, 2, you will see that it is the second one each time that bears the accent, thus:

Now, if you read the four remaining lines of the stanza you will see that in each one of these the second syllable bears the accent, until you come to the last line, where in the word fluttering, which, by the way, you pronounce flutt´ring, the accent is on the first syllable. If the poet did not now and then change the accent a little it would become tedious and monotonous.

It is a very simple matter, you see, to separate every line of poetry into groups of syllables, and in every group to place one accented syllable and one or more syllables that are not accented. Such a group is called a foot. Thus in each of the first two lines in this poem there are four feet. Each foot contains an accented and an unaccented syllable.

If you examine To the Fringed Gentian, To a Mouse, and To a Mountain Daisy, the three poems which follow this, you will see the same structure, except that in To a Mouse and in To A Mountain Daisy there are some short lines and some double rhymes, making the last foot a little different in character from the others.

When a line of poetry is composed of two-syllable feet in which the second syllable bears the accent we call that meter iambic. It is the prevalent foot in English poetry, and if you examine the different poems in these volumes you will be surprised to find out how many of them are written substantially on the plan of The Daffodils.

In naming the meter of a poem two things are considered: First the character of the feet, and second, the number of feet. In this poem the feet are iambic and there are four of them, consequently we name the meter of this poem iambic tetrameter. Whenever you hear those words you think of a poem whose meter is exactly like that of The Daffodils.

These words seem long and hard to remember. It may help you to remember them if you think that the word iam´bic contains an iambic foot.