Journals of Two Expeditions of Discovery in North-West and Western Australia, Volume 2 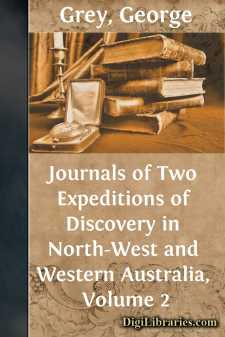 CHAPTER 1. FROM GANTHEAUME BAY TO THE HUTT RIVER.

WRECK OF THE SECOND BOAT IN GANTHEAUME BAY.

A few moments were sufficient to enable us all to recollect ourselves: two men endeavoured to keep the boat's stern on to the sea, whilst the rest of us lightened her by carrying everything we could on shore, after which we hauled her up. The custom had always been for the other boat to lie off until I made the signal for them to run in, and it accordingly was now waiting outside the breakers. Her crew had not seen our misfortunes owing to the height of the surf, which, when we were under it, shut us out from their view, and now perceiving that we were on shore and the boat hauled up, they concluded all was right; and notwithstanding I made every possible sign to them not to beach, running as far as I could venture into the sea and shouting out to them, my voice was drowned by the roar of the surge, and I saw them bounding on to, what I thought, certain destruction. We of course were all turned to render assistance. They fortunately kept rather to the south of the spot on which we had beached, and where it was much less rocky, so that the danger they incurred in reaching the shore was slight in comparison to ours; yet some of the planks of this boat were split throughout their entire length.

EXPLORE IN ITS VICINITY. COUNTRY ABOUT GANTHEAUME BAY. GEOLOGICAL REMARKS. CROSS A DISTRICT OF RED SANDSTONE.

Whilst all hands were employed in endeavouring to repair damages I ascended a hill to reconnoitre our present position and found we were in a country of a pleasing and romantic appearance, and although the land was not good the nature of the soil made me aware that we were most probably in the vicinity of a large tract of better quality; indeed this was the only part of South-west Australia in which I had met with the ancient red sandstone of the north-west coast; immediately behind the sandhills on which I stood was a thick Casuarina scrub which sloped down into a deep valley, and beyond this rose lofty and fantastic hills. After I had for some time looked round on this scene I returned to the party and received the report of the carpenters, who, having examined the boats, stated their inability to render either of them fit for sea. To this I had already made up my mind; and even if the boats had been uninjured I doubt whether we could ever have got them off again through the tremendous surf which was breaking on this part of the shore; whilst to have moved them to any distance would, in our present weak and enfeebled state, have been utterly impossible.

ESTUARY AND LANDING-PLACE AND SCENERY ABOUT IT.

No resource was now left to us but to endeavour to reach Perth by walking; yet when I looked at the sickly faces of some of the party and saw their wasted forms I much doubted if they retained strength to execute such a task; but they themselves were in high spirits and talked of the undertaking as a mere trifle. I gave orders for the necessary preparations to be made and then started with two or three hands to search for water....