Journals of Two Expeditions of Discovery in North-West and Western Australia, Volume 1 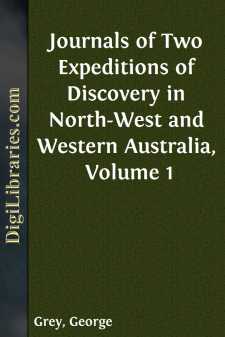 CHAPTER 1. COMMENCEMENT OF THE EXPEDITION. TENERIFE.

The Expeditions of which the results are narrated in the following pages took their origin from a proposition made to Government by myself, in conjunction with Lieutenant Lushington,* in the latter part of the year 1836.

At that time a large portion of the western coast and interior of the great Australian continent had remained unvisited and unknown; whilst the opinions of the celebrated navigators Captains Dampier and King, connected with other circumstances, led to the inference, or at least the hope, that a great river, or water inlet, might be found to open out at some point on its western or north-western side; which had then been only partially surveyed from seaward.

DESIGN OF THE EXPEDITION.

Anxious to solve this interesting geographical problem, we addressed a letter to Lord Glenelg, the Secretary of State for the Colonies, wherein we offered our services to conduct an exploration from the Swan River to the northward, having regard to the direction of the coast, so as to intersect any considerable body of water connecting it with the interior; and, in the event of such being discovered, to extend our examination of it as far as circumstances might admit.

The letter containing this offer also enumerated several secondary objects, to which we proposed to direct our attention, and which were ultimately comprehended in our instructions.

The offer and suggestions were favourably entertained by Lord Glenelg, and further communications invited; and, the project having been favoured by the support of the Royal Geographical Society, our services were finally accepted by the Government.

More mature consideration however led to a material alteration in the first plan; for whilst our principal object, namely, the search for a great river or interior inlet, remained the same, it was considered, for several reasons, more advisable that the exploration should commence from the vicinity of Prince Regent's River, on the north-west coast, and be directed towards the Swan. I shall pass over the various points of detail which occupied our time and attention until the moment of departure, as they offer no matters of general interest. It will be sufficient to say that everything suggested as likely to be conducive to the success and utility of the expedition was most liberally granted and supplied; and, when all was prepared, a letter of instructions dated the 16th June 1837 was addressed by Lord Glenelg to myself and Lieutenant Lushington conjointly; which embraced the following points:

1. We were to embark in H.M. sloop of war the Beagle, then fitting out for a survey of the coasts and seas of Australia, under the command of Captain Wickham, R.N.; and to proceed in that vessel either to the Cape of Good Hope or to Swan River, as might ultimately appear best suited to forward the objects of the expedition.

2. On our arrival at either of the foregoing places, we were directed to procure a small vessel to convey the party and stores to the most convenient point in the vicinity of Prince Regent's River....