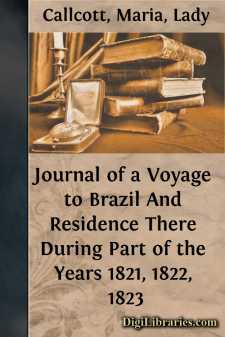 Add to My Favorites
Published: 11 years ago
Downloads: 33
Rating: (1 Vote)

Although the Journal of a voyage to Brazil, and of a residence of many months in that country, was not written without a view to publication at some time; yet many unforeseen circumstances forced the writer to pause before she committed it to press, and to cancel many pages recording both public and private occurrences.

Perhaps there is even yet too much of a personal nature, but what is said is at least honest; and if the writer should suffer personally by candour, the suffering will be cheerfully borne.

As to public events, all that can be new in the Journal is the bringing together facts which have reached Europe one by one, and recording the impression produced on the spot by those occurrences which might be viewed in a very different light elsewhere. Some have, no doubt, been distorted by the interested channels through which they have reached the public; some by the ignorance of the reporters; and most by the party spirit which has viewed either with enthusiasm or malignity the acquisition of freedom in any quarter of the globe.

The writer does not pretend to perfect impartiality, for in some cases impartiality is no virtue; but knowing that no human good can be attained without a mixture of evil, she trusts that a fair picture of both has been given, although it has cost some pain in the writing.

Of the natives of the country, or of those engaged in its service, what is said, whether of those still employed or of those no longer in the empire, was written under the impression of the moment; and the writer's confidence in the good sense and justice of the Brazilian government and people is such, that she leaves the passages as they stood at the moment of writing.

The events of the last three years in Brazil have been so important, that it was thought best not to interrupt the account of them, by continuing what may be called the writer's personal narrative after she reached Chile; therefore the two visits to Brazil are printed together, along with an Introduction containing a sketch of the history of the country previous to the first visit, and a notice of the public events of the year of her absence, to connect it with the second.

The Journal of a visit to Chile will form the subject of a separate volume.

It was thought essential that the narratives concerning Spanish and Portuguese America should be kept quite separate; the countries themselves being as different in climate and productions, as the inhabitants are in manners, society, institutions, and government.

Nothing can be more interesting than the actual situation of the whole of South America. While Europe was engaged in the great revolutionary war, that country was silently advancing towards the point at which longer subjection to a foreign dominion became impossible. Circumstances, not laws, had opened the ports of the South Atlantic and the Pacific. Individuals, not nations, had lent their aid to the patriots of the New World: and more warlike instruments and ammunition had gone silently from the warehouses of the merchant to arm the natives against their foreign tyrants, than had ever issued from the arsenals of the greatest nations. But, for a period, Brazil did not openly join in the struggle for independence. The Royal Family of Portugal took refuge there; and converted it, by that step, from a colony into the seat of government, from a state of slavery to one of sovereignty. Therefore, while the court continued to reside at Rio de Janeiro, the Brazilians had no inducement to break with the mother country. But it was very different when the King returned to Lisbon, and the Cortes, forgetting the change of men's minds produced by circumstances, endeavoured to force Brazil back to the abject state from which she had arisen. Then arose the struggle, some part of which it was the fortune of the writer to witness; and concerning which she was able to collect some facts which may serve as materials for future history. She trusts that if the whole truth is not to be found in her pages, that there will be nothing but the truth.

It is with no small anxiety that the Journal is sent into the world, in the hope that it may tend to excite interest for the country by making it better known. Perhaps the writer has over-rated her powers, in attempting to record the progress of so important an event as the emancipation of such an empire from the thraldrom of the mother country. The lighter part of her task, namely, the description of the country, its inhabitants, and the manners of the different classes, both of natives and foreigners, should have been fuller; but that want of health, and sometimes want of spirits, prevented her from making use of all the means that might have been within her reach of acquiring knowledge. She trusts, however, that there is no misrepresentation of importance; and that the Journal, the writing of which has to her beguiled many a lonely and many a sorrowful hour, will not give a moment's pain to any human creature.

I judged it necessary to prefix the following sketch of the history of Brazil to the journal of my voyage thither, in order that the political events to which I was an eye-witness might be the better understood.

The early part of the history is almost entirely taken from Mr. Southey. It would have been easy for me to have referred to the Portuguese authors, as I have read nearly all that are to be found in print of Mr. Southey's authorities, and some that he does not mention; but Mr. Southey had been so faithful as well as judicious in the use he has made of his authors, that it would have been absurd, if not impertinent, to have neglected his guidance. From the time of the King's arrival in Brazil, or rather of his leaving Lisbon, I am answerable for all I have stated: it is little, but I hope that little is correct.

The circumstances of Spanish and Portuguese America were very different in every stage. In Mexico, in Peru, in Chili, the conquerors encountered a people civilised and humane; acquainted with many of the arts of polished life; agriculturists and mechanics; knowing in the things belonging to the altar and the throne, and waging war for conquest and for glory. But the savages of Brazil were hunters and cannibals; they wandered, and they made war for food: few of the tribes knew even the cultivation of the mandioc, and fewer still had adopted any kind of covering, save paint and feathers for ornament. The Spanish conquests were more quickly made, and appeared more easily settled, because in states so far advanced in civilisation the defeat of an army decides the fate of a kingdom, and the land already cultivated, and the mines already known and worked, were entered upon at once by the conquerors....