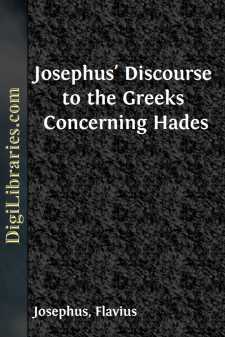 1. Now as to Hades, wherein the souls of the of the good things they see, and rejoice in the righteous and unrighteous are detained, it is necessary to speak of it. Hades is a place in the world not regularly finished; a subterraneous region, wherein the light of this world does not shine; from which circumstance, that in this region the light does not shine, it cannot be but there must be in it perpetual darkness. This region is allotted as a place of custody for souls, ill which angels are appointed as guardians to them, who distribute to them temporary punishments, agreeable to every one's behavior and manners.

2. In this region there is a certain place set apart, as a lake of unquenchable fire, whereinto we suppose no one hath hitherto been cast; but it is prepared for a day afore-determined by God, in which one righteous sentence shall deservedly be passed upon all men; when the unjust, and those that have been disobedient to God, and have given honor to such idols as have been the vain operations of the hands of men as to God himself, shall be adjudged to this everlasting punishment, as having been the causes of defilement; while the just shall obtain an incorruptible and never-fading kingdom. These are now indeed confined in Hades, but not in the same place wherein the unjust are confined.

3. For there is one descent into this region, at whose gate we believe there stands an archangel with an host; which gate when those pass through that are conducted down by the angels appointed over souls, they do not go the same way; but the just are guided to the right hand, and are led with hymns, sung by the angels appointed over that place, unto a region of light, in which the just have dwelt from the beginning of the world; not constrained by necessity, but ever enjoying the prospect of the good things they see, and rejoice in the expectation of those new enjoyments which will be peculiar to every one of them, and esteeming those things beyond what we have here; with whom there is no place of toil, no burning heat, no piercing cold, nor are any briers there; but the countenance of the and of the just, which they see, always smiles them, while they wait for that rest and eternal new life in heaven, which is to succeed this region. This place we call The Bosom of Abraham.

4. But as to the unjust, they are dragged by force to the left hand by the angels allotted for punishment, no longer going with a good-will, but as prisoners driven by violence; to whom are sent the angels appointed over them to reproach them and threaten them with their terrible looks, and to thrust them still downwards. Now those angels that are set over these souls drag them into the neighborhood of hell itself; who, when they are hard by it, continually hear the noise of it, and do not stand clear of the hot vapor itself; but when they have a near view of this spectacle, as of a terrible and exceeding great prospect of fire, they are struck with a fearful expectation of a future judgment, and in effect punished thereby: and not only so, but where they see the place [or choir] of the fathers and of the just, even hereby are they punished; for a chaos deep and large is fixed between them; insomuch that a just man that hath compassion upon them cannot be admitted, nor can one that is unjust, if he were bold enough to attempt it, pass over it.

5. This is the discourse concerning Hades, wherein the souls of all men are confined until a proper season, which God hath determined, when he will make a resurrection of all men from the dead, not procuring a transmigration of souls from one body to another, but raising again those very bodies, which you Greeks, seeing to be dissolved, do not believe [their resurrection]....