Johnson's Lives of the Poets - Volume 2 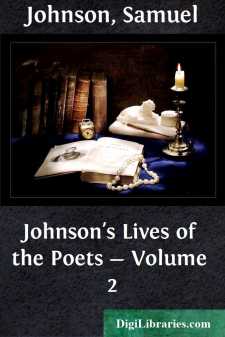 This volume contains a record of twenty lives, of which only one—that of Edward Young—is treated at length. It completes our edition of Johnson's Lives of the Poets, from which a few only of the briefest and least important have been omitted.

The eldest of the Poets here discussed were Samuel Garth, Charles Montague (Lord Halifax), and William King, who were born within the years 1660-63. Next in age were Addison's friend Ambrose Philips, and Nicholas Rowe the dramatist, who was also the first editor of Shakespeare's plays after the four folios had appeared. Ambrose Philips and Rowe were born in 1671 and 1673, and Isaac Watts in 1674. Thomas Parnell, born in 1679, would follow next, nearly of like age with Young, whose birth-year was 1681. Pope's friend John Gay was of Pope's age, born in 1688, two years later than Addison's friend Thomas Tickell, who was born in 1686. Next in the course of years came, in 1692, William Somerville, the author of "The Chace." John Dyer, who wrote "Grongar Hill," and James Thomson, who wrote the "Seasons," were both born in the year 1700. They were two of three poets—Allan Ramsay, the third—who, almost at the same time, wrote verse instinct with a fresh sense of outward Nature which was hardly to be found in other writers of that day. David Mallet, Thomson's college-friend and friend of after-years—who shares with Thomson the curiosity of critics who would decide which of them wrote "Rule Britannia"—was of Thomson's age.

The other writers of whose lives Johnson here gives his note were men born in the beginning of the eighteenth century: Gilbert West, the translator of Pindar, in 1706; George Lyttelton, in 1709. William Shenstone, whose sense of Nature, although true, was mixed with the conventions of his time, and who once asked a noble friend to open a waterfall in the garden upon which the poet spent his little patrimony, was born in 1714; Thomas Gray, in 1716; William Collins, in 1720; and Mark Akenside, in 1721. In Collins, while he lived with loss of reason, Johnson, who had fears for himself, took pathetic interest. Akenside could not interest him much. Akenside made his mark when young with "The Pleasures of Imagination," a good poem, according to the fashion of the time, when read with due consideration as a young man's first venture for fame. He spent much of the rest of his life in overloading it with valueless additions. The writer who begins well should let well alone, and, instead of tinkering at bygone work, follow the course of his own ripening thought. He should seek new ways of doing worthy service in the years of labour left to him.

William King was born in London in 1663; the son of Ezekiel King, a gentleman. He was allied to the family of Clarendon.

From Westminster School, where he was a scholar on the foundation under the care of Dr. Busby, he was at eighteen elected to Christ Church in 1681; where he is said to have prosecuted his studies with so much intenseness and activity, that before he was eight years' standing he had read over, and made remarks upon, twenty-two thousand odd hundred books and manuscripts....