Johnson's Lives of the Poets - Volume 1 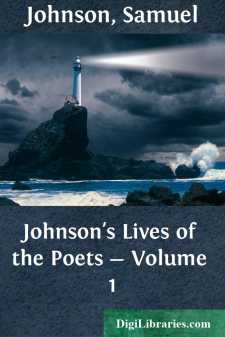 Johnson's "Lives of the Poets" were written to serve as Introductions to a trade edition of the works of poets whom the booksellers selected for republication. Sometimes, therefore, they dealt briefly with men in whom the public at large has long ceased to be interested. Richard Savage would be of this number if Johnson's account of his life had not secured for him lasting remembrance. Johnson's Life of Savage in this volume has not less interest than the Lives of Addison and Swift, between which it is set, although Savage himself has no right at all to be remembered in such company. Johnson published this piece of biography when his age was thirty-five; his other lives of poets appeared when that age was about doubled. He was very poor when the Life of Savage was written for Cave. Soon after its publication, we are told, Mr. Harte dined with Cave, and incidentally praised it. Meeting him again soon afterwards Cave said to Mr. Harte, "You made a man very happy t'other day." "How could that be?" asked Harte. "Nobody was there but ourselves." Cave answered by reminding him that a plate of victuals was sent behind a screen, which was to Johnson, dressed so shabbily that he did not choose to appear.

Johnson, struggling, found Savage struggling, and was drawn to him by faith in the tale he told. We have seen in our own time how even an Arthur Orton could find sensible and good people to believe the tale with which he sought to enforce claim upon the Tichborne baronetcy. Savage had literary skill, and he could personate the manners of a gentleman in days when there were still gentlemen of fashion who drank, lied, and swaggered into midnight brawls. I have no doubt whatever that he was the son of the nurse with whom the Countess of Macclesfield had placed a child that died, and that after his mother's death he found the papers upon which he built his plot to personate the child, extort money from the Countess and her family, and bring himself into a profitable notoriety.

Johnson's simple truthfulness and ready sympathy made it hard for him to doubt the story told as Savage told it to him. But when he told it again himself, though he denounced one whom he believed to be an unnatural mother, and dealt gently with his friend, he did not translate evil into good. Through all the generous and kindly narrative we may see clearly that Savage was an impostor. There is the heart of Johnson in the noble appeal against judgment of the self-righteous who have never known the harder trials of the world, when he says of Savage, "Those are no proper judges of his conduct, who have slumbered away their time on the down of plenty; nor will any wise man easily presume to say, 'Had I been in Savage's condition, I should have lived or written better than Savage.'" But Johnson, who made large allowance for temptations pressing on the poor, himself suffered and overcame the hardest trials, firm always to his duty, true servant of God and friend of man.

Richard Savage's whole public life was built upon a lie....