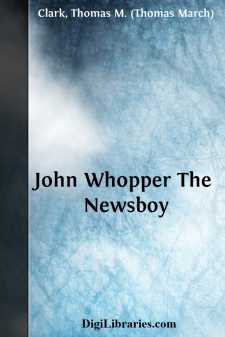 CHAPTER I. HOW JOHN WHOPPER DISCOVERED THE AIR-LINE TO CHINA.

Two years ago last February, I think it was on a Tuesday morning, I started as usual very early to distribute my papers. I had a large bundle to dispose of that day, and thought that if I took a short cut across the fields, instead of following the road from Roxbury to Jamaica Plain, I could go my rounds in much less time. I do not care to tell precisely where it was that I jumped over the fence; but it is a rough, barren kind of spot, which nobody has ever done any thing to improve.

After walking about a third of a mile, I began to think that I had better have kept to the turnpike; for I found that I was obliged to clamber over an uneven, rocky place, among trees and bushes and shrubs, that grew just thick enough to bother me, so that I hardly knew where to put my feet. All at once I lost my balance, and felt that I was sliding down the side of a smooth, steep rock; while underneath, to my horror, I saw what looked like a circular cave, or well, some five or six feet in diameter. I tried to grasp the rock with my hands, and ground my heels as hard as I could against the surface, but it was of no use; down I slipped, faster and faster, until at last I plunged, feet foremost, into the dark hole below. For a moment I held my breath, expecting to be dashed to pieces; and oh, how many things I thought of in that short minute! It seemed as if every thing that I had ever done came back to me, especially all the bad things; and how I wished then that I had lived a better life! I thought, too, of my poor mother and my little brother and sister at home, and how they would wait breakfast for me that morning; and how they would keep on waiting and waiting, hour after hour and day after day; and how the neighbors would all turn out and search for me; and how I should never be found, and nobody would ever know what had become of me. And then I wondered whether Mr. Simpson, who employed me to distribute the papers, would suppose that I had run away somewhere, to sell them on my own account; and so I went on thinking and wondering, until it seemed as if there was no end to the time. And yet I didn't strike the bottom of the cave, but just went on falling and falling, faster and faster, in the darkness, and sometimes just grazing the sides, and still not so as to hurt me much. My great trouble was to breathe; when it occurred to me to lay the sleeve of my coat across my mouth: and then I found that I could breathe through the cloth with tolerable ease. After a while, I recovered my senses; and though I continued to fall on still faster and faster, I experienced no great inconvenience. How long this continued, I cannot tell; it appeared to be an age; and I must have been falling for several hours, when I began to feel as though I was not sinking as fast as I had been; and after a while, it seemed as if I were rising up, rather than tumbling down. As I was now able to breathe much more freely than I had done, I began to think calmly about my condition; and then the thought flashed across my mind, that perhaps I had passed the centre of the earth, and was gradually rising to the surface on the other side....