by F. B. (Frederick Brotherton) Meyer 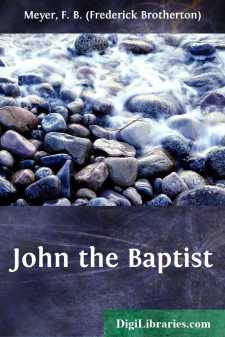 JOHN THE BAPTIST. I.

The Interest of his Biography.

"John, than which man a sadder or a greater    Not till this day has been of woman born;  John, like some iron peak by the Creator    Fired with the red glow of the rushing morn.

The morning star, shining amid the brightening glow of dawn, is the fittest emblem that Nature can supply of the herald who proclaimed the rising of the Sun of Righteousness—answering across the gulf of three hundred years to his brother prophet, Malachi, who had foretold that Sunrise and the healing in His wings.

Every sign attests the unique and singular glory of the Baptist. Not that his career was signalized by the blaze of prodigy and wonder, like the multiplication of the widow's meal or the descent of the fire of heaven to consume the altar and the wood; for it is expressly said that "John did no miracle." Not that he owed anything to the adventitious circumstances of wealth and rank; for he was not a place-loving courtier, "clothed in soft raiment or found in kings' courts." Not that he was a master of a superb eloquence like that of Isaiah or Ezekiel; for he was content to be only "a cry"—short, thrilling, piercing through the darkness, ringing over the desert plains. Yet, his Master said of him that "among them that are born of women there hath not risen a greater than John the Baptist"; and in six brief months, as one has noticed, the young prophet of the wilderness had become the centre to which all the land went forth. We see Pharisees and Sadducees, soldiers and publicans, enthralled by his ministry; the Sanhedrim forced to investigate his claims; the petty potentates of Palestine caused to tremble on their thrones; while he has left a name and an influence that will never cease out of the world.

But there is a further feature which arrests us in the life and ministry of the Baptist. He was ordained to be "the clasp" of two covenants. In him Judaism reached its highest embodiment, and the Old Testament found its noblest exponent. It is significant, therefore, that through his lips the law and the prophets should announce their transitional purpose, and that he who caught up the torch of Hebrew prophecy with a grasp and spirit unrivalled by any before him, should have it in his power and in his heart to say: "The object of all prophecy, the purpose of the Mosaic law, the end of all sacrifices, the desire of all nations, is at hand." And forthwith turning to the True Shepherd, who stood at the door waiting to be admitted, to Him the porter opened, bowing low as He passed, and crying: "This is He of whom Moses in the law and the prophets did write, Jesus of Nazareth, who was for to come."

Few studies can bring out to clearer demonstration the superlative glory of Christ than a thoughtful consideration of the story of the forerunner....