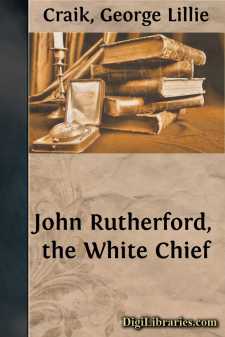 Eighty years ago, when the story told in these pages was first published, "forecastle yarns" were more thrilling than they are now. In these days we look for information in regard to a new land's capabilities for pastoral, agricultural, and commercial pursuits; in those days it was customary, with a large portion of the British public, at any rate, to expect sailors to tell stories

Of the cannibals that each other eat,The Anthropophagi, and men whose headsDo grow beneath their shoulders,

and to relate other particulars likely to arrest the attention and excite the imagination. Men then sailed to unknown lands, peopled by unknown barbarians, and their adventures in strange and mysterious countries were clothed in a romance which has been almost completely dispelled by the telegraph, the newspaper press, cheap books, and rapid transit, and by the utilitarian ideas which have swept over the world.

It was largely to meet the public taste for something wonderful and striking that John Rutherford's story of adventures in New Zealand saw the light of publicity. In fairness to the original editor and the publisher, however, it should be stated that the story was given also as a means of supplying interesting information in regard to a country and a race of which very little was then known. It was embodied in a book of 400 pages, entitled "The New Zealanders," published in 1830, for the Society for the Diffusion of Useful Knowledge, by the famous publisher, Charles Knight.

He was a versatile, talented, and ambitious man; but all his ambitions ran in the direction of the public good. From the time of his early manhood, he wished to become a public instructor. At first he tried to achieve his end by means of journalism, which he entered in 1812, by reporting Parliamentary debates for "The Globe" and "The British Press," two London journals. Later on he started a publishing business in London. Dealing only with instructive subjects, he established "Knight's Quarterly Magazine," and other periodicals, to which he was one of the prominent contributors.

He was not a business man, and in 1828 he was overwhelmed by financial difficulties. In the meantime he had become acquainted with the brilliant but erratic Lord Brougham, who had completed arrangements for putting into operation one of his great enterprises for educating the masses. This was the establishment of the Society for the Diffusion of Useful Knowledge. It began a series of publications under the title of "The Library of Entertaining Knowledge," which Knight published. The first volume, written by Knight himself, was "The Menageries"; the second was "The New Zealanders." Other publications were issued by the society until it was dissolved in 1846. Knight continued to send works out of the press nearly to the end of his useful life, in March, 1873. Some of these were written by himself, some by friends, and some were translations. His "Penny Magazine," at the end of its first year, had a sale of 200,000 copies....