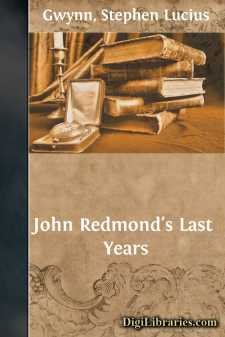 CHAPTER I INTRODUCTORY I

The time has not yet come to write the biography of John Redmond. Not until the history of the pledge-bound Irish Parliamentary party can be treated freely, fully and impartially as a chapter closed and ended will it be possible to record in detail the life of a man who was associated with it almost from its beginning and who from the opening of this century guided it with almost growing authority to the statutory accomplishment of its desperate task; who knew, in it and for it, all vicissitudes of fortune and who gave to it without stint or reservation his whole life's energy from earliest manhood to the grave.

But when the war came, unforeseen, shifting all political balances, transmuting the greatest political issues, especially those of which the Irish question is a type, it imposed upon men and upon nations, but above all on the leaders of nations, swift and momentous decisions. Because that critical hour presented to Redmond's vision a great opportunity which he must either seize single-handed or let it for ever pass by; because he rose to the height of the occasion with the courage which counts upon and commands success; because he sought by his own motion to swing the whole mass and weight of a nation's feeling into a new direction—for all these reasons his last years were different in kind from any that had gone before; and as such they admit of and demand separate study. Intelligent comprehension of what he aimed at, what he achieved, and what forces defeated him in these last years of his life is urgently needed, not for the sake of his memory, but for Ireland's sake; because until his policy is understood there is little chance that Irishmen should attain what he aspired to win for Ireland—the strength and dignity of a free and united nation.

It is of Redmond's policy for Ireland in relation to the war, and to the events which in Ireland arose out of the war, that this book is mainly designed to treat. Yet to make that policy intelligible some history is needed of the startling series of political developments which the war interrupted but did not terminate—and which, though still recent, are blurred in public memory by all that has intervened. Further back still, a brief review of his early career must be given, not only to set the man's figure in relation to his environment, but to show that this final phase was in reality no new departure, no break with his past, but a true though a divergent evolution from all that had gone before.

Ireland, although so small in extent and population, is none the less a country of many and locally varying racial strains; and John Redmond sprang from one of the most typical. He was a Wexfordman; that is to say, he came from the part of Ireland where if you cross the Channel there is least difference between the land you leave and the land you sail to; where the sea-divided peoples have been always to some extent assimilated. Here in the twelfth century the first Norman-Welsh invaders came across....