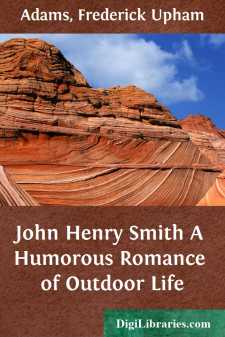 "Heard the news?" demanded Chilvers, approaching the table whereMarshall, Boyd, and I were smoking on the broad veranda of the WoodvaleGolf and Country Club. We shook our heads with contented indifference.It was after luncheon, and the cigars were excellent.

"Where's LaHume?" grinned Chilvers. "Where's our Percy? He must hear this."

Miss Ross and Miss Dangerfield turned the corner and Chilvers saw them. Chilvers is married, but has lost none of his effervescence and consequently retains his popularity.

"Come here," he called, motioning to these two charming young ladies."I've got something for you! Great news; great news!"

"What is it?" asked Miss Ross, her deep-brown eyes brightening with curiosity.

"Another heiress coming!" announced Chilvers, with the bow of a jeweller displaying some rare gem "—another heiress on her way to Woodvale! This is going to be a hard season for such perennial bachelors as Smith, Boyd, Carter, and others I could name. You girls will have your work cut out when this new heiress unpacks her trunks and sets fluttering the hearts of these steel-plated golfers."

"Who is it?" impatiently demanded the chorus. Chilvers has all the arts of an actor in working for a climax.

"The one to whom Baron Torpington was reported engaged?" I added.

"You all have guessed it the first time," laughed Chilvers. "She's the only daughter of Robert L. Harding, magnate, financier, Wall Street general, the man who recently beat the pirate kings down there at their own game. How much is Harding supposed to be worth, Smith?"

"Thirty millions or so," I replied.

"Well, I wish I had the 'so.' That would keep me in golf balls for a while," Chilvers continued, turning his attention to the ladies. "What show have you unfortunate girls against a combination like that? And think of Percy LaHume! What will that poor boy do? Percy heads for the richest heiress of each season with that same mighty instinct which leads a boy to cast wistful glances at the largest cut of pie. He thought the heiresses had quit coming, and now this happens; but he has gone so far in his campaign for the hand and cheque-book of Miss Lawrence, that he cannot stop quick without dislocating his spine. I doubt if that poor little Lawrence girl will ever have more than five millions."

"Never mind Percy and his prospects," said Marshall. "Who told you thatMiss Grace Harding is coming to Woodvale?"

"Carter told me," replied Chilvers. "Carter knows them. The whole Harding family is coming, which includes Croesus, his wife, and their fair daughter, aged nineteen or thereabouts. Ah! why did I marry so soon?"