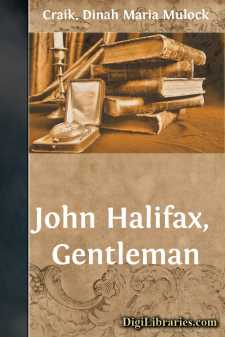 "Vagabond," I think the woman (Sally Watkins, once my nurse), was going to say, but she changed her mind.

My father and I both glanced round, surprised at her unusual reticence of epithets: but when the lad addressed turned, fixed his eyes on each of us for a moment, and made way for us, we ceased to wonder. Ragged, muddy, and miserable as he was, the poor boy looked anything but a "vagabond."

"Thee need not go into the wet, my lad. Keep close to the wall, and there will be shelter enough both for us and thee," said my father, as he pulled my little hand-carriage into the alley, under cover, from the pelting rain. The lad, with a grateful look, put out a hand likewise, and pushed me further in. A strong hand it was—roughened and browned with labour—though he was scarcely as old as I. What would I not have given to have been so stalwart and so tall!

Sally called from her house-door, "Wouldn't Master Phineas come in and sit by the fire a bit?"—But it was always a trouble to me to move or walk; and I liked staying at the mouth of the alley, watching the autumnal shower come sweeping down the street: besides, I wanted to look again at the stranger-lad.

He had scarcely stirred, but remained leaning against the wall—either through weariness, or in order to be out of our way. He took little or no notice of us, but kept his eyes fixed on the pavement—for we actually boasted pavement in the High Street of our town of Norton Bury—watching the eddying rain-drops, which, each as it fell, threw up a little mist of spray. It was a serious, haggard face for a boy of only fourteen or so. Let me call it up before me—I can, easily, even after more than fifty years.

Brown eyes, deep-sunken, with strongly-marked brows, a nose like most other Saxon noses, nothing particular; lips well-shaped, lying one upon the other, firm and close; a square, sharply outlined, resolute chin, of that type which gives character and determination to the whole physiognomy, and without which in the fairest features, as in the best dispositions, one is always conscious of a certain want.

As I have stated, in person the lad was tall and strongly-built; and I, poor puny wretch! so reverenced physical strength. Everything in him seemed to indicate that which I had not: his muscular limbs, his square, broad shoulders, his healthy cheek, though it was sharp and thin—even to his crisp curls of bright thick hair.

Thus he stood, principal figure in a picture which is even yet as clear to me as yesterday—the narrow, dirty alley leading out of the High Street, yet showing a glimmer of green field at the further end; the open house-doors on either side, through which came the drowsy burr of many a stocking-loom, the prattle of children paddling in the gutter, and sailing thereon a fleet of potato parings. In front the High Street, with the mayor's house opposite, porticoed and grand: and beyond, just where the rain-clouds were breaking, rose up out of a nest of trees, the square tower of our ancient abbey—Norton Bury's boast and pride....