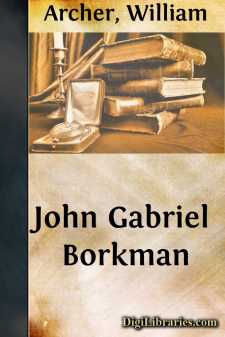 The anecdotic history of John Gabriel Borkman is even scantier than that of Little Eyolf. It is true that two mentions of it occur in Ibsen's letters, but they throw no light whatever upon its spiritual antecedents. Writing to George Brandes from Christiania, on April 24, 1896, Ibsen says: "In your last letter you make the suggestion that I should visit London. If I knew enough English, I might perhaps go. But as I unfortunately do not, I must give up the idea altogether. Besides, I am engaged in preparing for a big new work, and I do not wish to put off the writing of it longer than necessary. It might so easily happen that a roof-tile fell on my head before I had 'found time to make the last verse.' And what then?" On October 3 of the same year, writing to the same correspondent, he again alludes to his work as "a new long play, which must be completed as soon as possible." It was, as a matter of fact, completed with very little delay, for it appeared in Copenhagen on December 15, 1896.

The irresponsible gossip of the time made out that Bjornson discerned in the play some personal allusions to himself; but this Bjornson emphatically denied. I am not aware that any attempt has been made to identify the original of the various characters. It need scarcely be pointed out that in the sisters Gunhild and Ella we have the pair of women, one strong and masterful, the other tender and devoted, who run through so many of Ibsen's plays, from The Feast at Solhoug onwards—nay, even from Catalina. In my Introduction to The Lady from the Sea (p. xxii) it is pointed out that Ibsen had the character of Foldal clearly in his mind when, in March 1880, he made the first draft of that play. The character there appears as: "The old married clerk. Has written a play in his youth which was only once acted. Is for ever touching it up, and lives in the illusion that it will be published and will make a great success. Takes no steps, however, to bring this about. Nevertheless accounts himself one of the 'literary' class. His wife and children believe blindly in the play." By the time Foldal actually came to life, the faith of his wife and children had sadly dwindled away.

There was scarcely a theatre in Scandinavia or Finland at which John Gabriel Borkman was not acted in the course of January 1897. Helsingors led the way with performances both at the Swedish and the Finnish Theatres on January 10. Christiania and Stockholm followed on January 25, Copenhagen on January 31; and meanwhile the piece had been presented at many provincial theatres as well. In Christiania, Borkman, Gunhild, and Ella were played by Garmann, Fru Gundersen, and Froken Reimers respectively; in Copenhagen, by Emil Pousen, Fru Eckhardt, and Fru Hennings. In the course of 1897 it spread all over Germany, beginning with Frankfort on Main, where, oddly enough, it was somewhat maltreated by the Censorship. In London, an organization calling itself the New Century Theatre presented John Gabriel Borkman at the Strand Theatre on the afternoon of May 3, 1897, with Mr....