John Deane of Nottingham Historic Adventures by Land and Sea 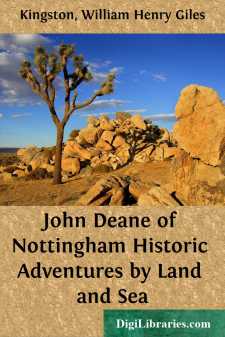 Romantic Sherwood! Its pristine glories since the days when bold Robin Hood and his merrie men held sway within its borders, and levied taxes from the passers-by, had sadly dwindled even in the year 1696, when our history commences. The woodman’s axe had been busy and the plough had gone over the land, and mansions and homesteads had arisen where once flourished the monarchs of the forest, and the huntsman’s horn had been wont to sound amid sequestered glades; still many a wide stretch of woodland and moorland remained, over which the fallow deer roamed at freedom, and rows of far-spreading trees overhung various by-paths green and narrow winding in all directions, and shaded the king’s highway which ran north to York and south to the ancient and pleasant town of Nottingham. And there were likewise majestic avenues leading to the abodes of nobles and squires, and thick copses and scattered groves, above which rose the hoary giants of ancient days; and by the borders of the streams and rivulets which find their way into the Trent numberless trees had been allowed to stand. Wide strips also of grass-land were to be found running even with the road or between different estates, extending sometimes in an unbroken line for several miles together, with oaks and elms and beeches stretching out their umbrageous branches to meet from either side, and preserving by their shade the soft velvet of the turf even during the heats of summer.

Thus the old forest trees, if marshalled in close order, would have formed a wood of no inconsiderable magnitude.

The noon-day sun of the warm summer was shining down on the branches of the wide-spreading trees shading a long woodland glade, such as has been described running from the north towards Nottingham, the walls of whose siege-battered castle could be seen in the far distance, where on a slight eminence the trees opening out afforded a momentary glance of the country in front.

Just at that spot a gentleman of middle age, mounted on a strong, active horse, accompanied by a young lady on a graceful palfrey, was riding at a leisurely pace along the glade in the direction of the town. The gold lace with which his long, loose riding-coat was trimmed, his embroidered waistcoat, the gold ornament which secured the turned-up flaps of his beaver, and more than all, the jewel-hilted sword by his side, bespoke a person of position. He wore also leather breeches and buff-leather boots, the usual horseman’s dress of the period.

The fair girl by his side sat her horse with that perfect ease which habit alone can give. Her blue riding-coat was turned up with white, with broad flaps and pockets, the petticoat below being of the same colour; her waistcoat was elegantly embroidered, and the small three-cornered hat with a jewel in front which she wore on the top of her light auburn hair, undisfigured by powder, completed her unassuming yet most becoming costume. Her figure was tall and slight, and her fair and brilliant complexion increased the beauty of her well-formed features, expressive of wit and humour, at the same time indicating thought and feeling....