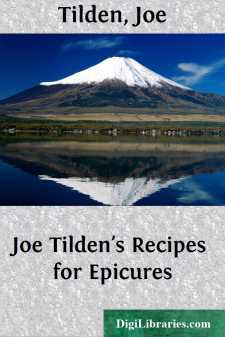 Place six ounces of butter in a large saucepan over the fire, and stir into it four large white onions cut up, not sliced. Stew this very slowly for one hour, stirring frequently to prevent its scorching. Add salt, pepper, cayenne, and about one quart of stock, and cook one hour longer. Then stir into the mixture one and a half cups of milk and simmer for a few minutes. Have ready a soup tureen. In it beat the yolks of four eggs with two tablespoons of grated Parmesan cheese. Stir the hot soup into this, beating until it thickens a little. A slice of toasted French bread should be placed in each plate, and the soup poured over it.

Slice two or three Jerusalem artichokes and place in two quarts of boiling water. Cook for one and one-half hours. Then rub the artichokes through a colander and add to them one pint of the water in which they were boiled. Stir in two tablespoonfuls of flour rubbed into the same amount of butter. Add two cups of milk and boil for ten minutes. Season with salt and pepper and serve with croutons.

Soak over night one quart of black turtle beans in water to cover them. In the morning strain and boil them in four quarts of water for one hour, skimming frequently. Then put into the liquor two white onions sliced, two stalks of celery cut into bits, salt, pepper, cayenne, and one teaspoonful each of cloves and allspice. Boil for three hours. Remove from the stove and add enough stock to thin the mixture to the consistency of a cream soup. Pour into it nearly a tumbler of sherry and add a thinly sliced lime. Place over the fire to boil for five minutes. Just before serving stir into the soup three hard-boiled eggs, finely chopped. Force meat balls may be added.

Put into a saucepan five pounds of tomatoes, either fresh or canned, with one quart of water, salt, pepper, cayenne, one and one-half tablespoonfuls of sugar, and three ounces of butter, rubbed into one heaping tablespoonful of flour. Cook slowly one hour. Remove from the fire and rub through a sieve. Place over the fire again and add one and one-half tablespoonfuls of rice flour which has been dissolved in a little water. Let it come to a boil, when it is ready to serve.

Boil one small cupful of rice in three pints of milk, or two pints of milk and one of cream, until it is tender. Then rub it through a sieve and add one quart of veal stock, salt, cayenne, and three heads of celery (the white stalks only) which have been previously grated. Boil until the celery is tender.

Bisque of Prawns or Shrimps

Boil three dozen prawns twenty minutes in salted water to cover them. Meanwhile in two small tablespoonfuls of butter, fry an onion and a carrot sliced, and a small piece of salt pork chopped. Take the prawns out of the boiling water and add to it the fried mixture with salt, pepper, a bunch of sweet herbs and one-half the prawns added again....