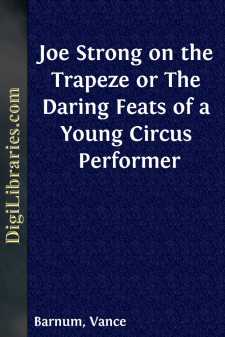 CHAPTER I THE FIRE TRICK

"All right. That ought to go well. And you are getting ready for——"

"The fire trick," interrupted Professor Alonzo Rosello, as he and his young assistant, Joe Strong, stood bowing and smiling in response to the applause of the crowd that had gathered in the theatre to witness the feats of "Black Art, Magic, Illusion, Legerdemain, Prestidigitation and Allied Sciences." That was what the program called it, anyhow.

"The fire trick!" repeated Joe. "Do you think it will work all right now?"

"I think it will. I've had the apparatus overhauled, and you know we can depend on the electric current here. It isn't likely to fail just at the wrong moment."

Again Joe had to bow, as did Professor Rosello, for the applause continued. They were both sharing it, for both had taken part in a novel trick, and it had been successfully performed.

Joe had taken his place in a chair on the stage, and, after having been covered by a black cloth by the professor, had, when the cloth was removed a moment later, totally disappeared. Then he was seen walking down the aisle of the theatre, coming in from the lobby.

There was much wonder as to how the trick was it done, especially since the chair had been placed over a sheet of paper on the stage, and, before and after the trick, the professor had exhibited the sheet—the front page of a local paper—apparently unbroken. (This trick is explained in detail in the first volume of this series, entitled, "Joe Strong, the Boy Wizard.")

"The audience seems to be in good humor to-night," observed the professor to Joe, as they bowed again. The two could carry on a low-voiced conversation while "taking" their applause.

"Yes, I'm glad to see them that way," answered the youth. "It's not much fun playing to a frosty house."

"I should say not! Well, Joe, get ready for your pigeon-omelet trick, and I'll prepare the fire apparatus."

The professor, with a final bow, made an exit to one side of the stage, which was fitted up with Oriental splendor. As he went off, and as Joe Strong picked up some apparatus from a table near him, a disturbed look came over the face of the boy wizard.

"I don't like that fire trick," he mused. "It's altogether too uncertain. It's spectacular, and all that, and when it works right it makes a big hit, but I don't like it. Well, I suppose he'll do it, anyhow—or try to. I'll be on the lookout though. If the current fails, as it did last time——" Joe shrugged his shoulders, and went on with his trick.

Since he had become associated with Professor Rosello, Joe had adopted the philosophic frame of mind that characterizes many public performers, especially those who risk bodily injury in thrilling the public. That is, he was willing to take the chance of accident rather than disappoint an audience. "The show must go on," was the motto, no matter how the performer suffered. The public does not often realize its own cruelty in insisting on being amused or thrilled....