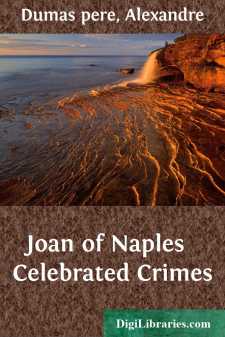 In the night of the 15th of January 1343, while the inhabitants of Naples lay wrapped in peaceful slumber, they were suddenly awakened by the bells of the three hundred churches that this thrice blessed capital contains. In the midst of the disturbance caused by so rude a call the first thought in the mind of all was that the town was on fire, or that the army of some enemy had mysteriously landed under cover of night and could put the citizens to the edge of the sword. But the doleful, intermittent sounds of all these fills, which disturbed the silence at regular and distant intervals, were an invitation to the faithful to pray for a passing soul, and it was soon evident that no disaster threatened the town, but that the king alone was in danger.

Indeed, it had been plain for several days past that the greatest uneasiness prevailed in Castel Nuovo; the officers of the crown were assembled regularly twice a day, and persons of importance, whose right it was to make their way into the king's apartments, came out evidently bowed down with grief. But although the king's death was regarded as a misfortune that nothing could avert, yet the whole town, on learning for certain of the approach of his last hour, was affected with a sincere grief, easily understood when one learns that the man about to die, after a reign of thirty-three years, eight months, and a few days, was Robert of Anjou, the most wise, just, and glorious king who had ever sat on the throne of Sicily. And so he carried with him to the tomb the eulogies and regrets of all his subjects.

Soldiers would speak with enthusiasm of the long wars he had waged with Frederic and Peter of Aragon, against Henry VII and Louis of Bavaria; and felt their hearts beat high, remembering the glories of campaigns in Lombardy and Tuscany; priests would gratefully extol his constant defence of the papacy against Ghibelline attacks, and the founding of convents, hospitals, and churches throughout his kingdom; in the world of letters he was regarded as the most learned king in Christendom; Petrarch, indeed, would receive the poet's crown from no other hand, and had spent three consecutive days answering all the questions that Robert had deigned to ask him on every topic of human knowledge. The men of law, astonished by the wisdom of those laws which now enriched the Neapolitan code, had dubbed him the Solomon of their day; the nobles applauded him for protecting their ancient privileges, and the people were eloquent of his clemency, piety, and mildness. In a word, priests and soldiers, philosophers and poets, nobles and peasants, trembled when they thought that the government was to fall into the hands of a foreigner and of a young girl, recalling those words of Robert, who, as he followed in the funeral train of Charles, his only son, turned as he reached the threshold of the church and sobbingly exclaimed to his barons about him, "This day the crown has fallen from my head: alas for me! alas for you!"

Now that the bells were ringing for the dying moments of the good king, every mind was full of these prophetic words: women prayed fervently to God; men from all parts of the town bent their steps towards the royal palace to get the earliest and most authentic news, and after waiting some moments, passed in exchanging sad reflections, were obliged to return as they had come, since nothing that went on in the privacy of the family found its way outside—the castle was plunged in complete darkness, the drawbridge was raised as usual, and the guards were at their post....