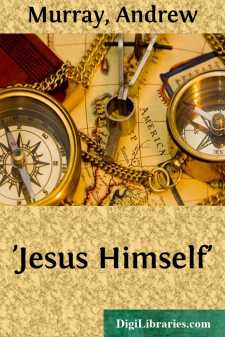 Their eyes were opened, and they knew Him."

THE words, from which I want to present a simple message, will be found in the Gospel according to St. Luke, the 24th chapter and the 31st verse: "And their eyes were opened, and they knew Him." Some time since, I preached a sermon with the words "Jesus Himself" as the text; and as I went home I said to those who were walking with me: "How possible it is to have Jesus Himself with us and never to know it, and how possible to preach of, and to listen to, all the truth about Jesus Himself and yet not to know Him." I cannot say what a deep impression was made upon me as I thought over it.

Now these disciples had spent a most blessed time with Jesus, but if they had gone away before He revealed Himself that evening, they would never have been sure that it was Jesus, for their eyes were holden that they should not know Him. That is, alas, the condition of a great multitude in the Church of Christ. They know that Christ has risen from the dead. They believe, and they very often have blessed experiences that come from the risen Christ. Very often in a time of Convention, or in time of silent Bible reading, or in a time of the visitation of God's grace, their hearts burn; and yet it can be said of a people whose hearts are burning within them, that they did not know it was Jesus Himself.

And now if you ask me what is to be the great blessing to be sought, my answer is this: Not only should we think about Jesus Himself and speak about Him and believe in Him, but we should come to the point that the disciples in the text arrived at, "and they knew Him." Everything is to be found in that.

If I read that story of the disciples on the way to Emmaus, I get from it four stages in the Christian life. Just think! How did they begin the morning that day? With

The disciples began the morning with a sad heart. I fancy very possibly they spent a sleepless night. Oh! the terrible disappointment! They had hoped that Christ would be the Deliverer of Israel, and they had seen Him die an accursed death. On the morning of that first day of the week, they rose with sad hearts—the bitter sadness cannot be expressed. That is just the life of many Christians. They try to believe in Jesus and to trust Him, and to hope in Him, but there is no joy. Why? Because they do not know that there is a living Christ to reveal Himself.

Then there is the second stage. What is that? The stage of which Christ speaks:

"Slow of heart to believe."

They had the message from the women. They told the stranger who walked with them: "Certain women have astonished us, telling us they have seen an angel, who says He is alive." And Christ replied to them: "Oh! fools, and slow of heart to believe." Yes! there are many Christians to-day who have heard and who know that they must not only believe in a crucified Christ, but in a living Christ, and they try to grasp it and take it in, but it does not bring them a blessing, and why?...