Jess of the Rebel Trail 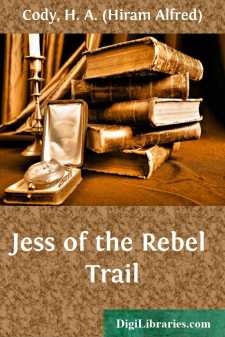 CHAPTER I THE HOLD-UP

The glowing coals in the spacious grate seemed to fascinate the woman as she sat huddled in a big luxurious chair. The book she had been reading was lying open and unheeded on her lap. Her surroundings were by no means in keeping with her dejected manner. The room was cosy and lavishly furnished, while the shaded electric reading-lamp cast its gentle radiance upon the woman's white hair and soft evening-gown. It was a rough night, and the wind howling outside beat furiously against the closely-blinded windows.

It was a night such as this, nearly twenty years before, of which the woman was thinking. She was once again in a room in a private hospital, lying weak and helpless from the ordeal through which she had passed. It all came back to her now with a stinging intensity, causing her white hands to clench hard, and her eyes to widen with a nameless fear.

A maid entered and announced a visitor.

"I can't see anyone to-night," the woman before the fire declared, without even turning her head.

"That is all, Maggie. You need not say anything more. I wish to be left entirely alone."

The maid hesitated a few seconds before obeying the imperious command. Then she slowly turned, and had almost reached the door when it was suddenly pushed open and a man entered. Without a word, he stepped past her and glided across the room toward the fire. His unexpected appearance startled the woman crouching there. She straightened quickly up and stared at the intruder in amazement.

"Who are you?" she demanded. "How dare you come here? Maggie, put this man out."

But Maggie had disappeared, so the woman was left to face the man alone.

"I won't harm you, madame," he smilingly informed her, as he moved closer to the fire and stretched put his hands. "I'm as harmless as a kitten."

"Keep back," the woman ordered. "Don't come so close."

Again the man smiled as he rubbed his hands together.

"I wasn't worrying about you," the woman retorted. "I would like to see you burn yourself for your impudence."

Her fear had now vanished, and she was angry. She carefully noted the man's slight figure, and threadbare clothes. But his face was what attracted her most of all. It was somewhat chubby, and when the mouth was expanded by the almost incessant smile the cheeks were wrinkled like corrugated iron. His head was bald, save for a few tufts of hair above the ears. His bulging eyes twinkled with good humour, causing an observer to feel that their owner was well satisfied with himself and the entire world.

"Who are you?" the woman again demanded. "How dare you come uninvited into my room?"

The man straightened, himself up, and standing with his back to the fire brought forth a package of cigarettes, selected one, and deliberately lighted it.

"Indeed I do," the woman replied. "I hate smoking. I never allow it in this room."