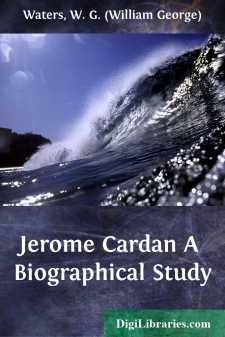 No attempt is made in the following pages to submit to historical treatment the vast and varied mass of printed matter which Cardan left as his contribution to letters and science, except in the case of those works which are, in purpose or incidentally, autobiographical, or of those which furnish in themselves effective contributions towards the framing of an estimate of the genius and character of the writer. Neither has it seemed worth while to offer to the public another biography constructed on the lines of the one brought out by Professor Henry Morley in 1854, for the reason that the circumstances of Cardan's life, the character of his work, and of the times in which he lived, all appeared to be susceptible of more succinct and homogeneous treatment than is possible in a chronicle of the passing years, and of the work that each one saw accomplished. At certain junctures the narrative form is inevitable, but an attempt has been made to treat the more noteworthy episodes of Cardan's life and work, and the contemporary aspect of the republic of letters, in relation to existing tendencies and conditions, whenever such a course has seemed possible.

Professor Morley's book, The Life of Girolamo Cardano, of Milan, physician, has been for some time out of print. This industrious writer gathered together a large quantity of material, dealing almost as fully with the more famous of the contemporary men of mark, with whom Cardan was brought into contact, as with Cardan himself. The translations and analyses of some of Cardan's more popular works which Professor Morley gives are admirable in their way, but the space they occupy in the biography is somewhat excessive. Had sufficient leisure for revision and condensation been allowed, Professor Morley's book would have taken a high place in biographical literature. As it stands it is a noteworthy performance; and, by reason of its wide and varied stores of information and its excellent index, it must always prove a valuable magazine of mémoires pour servir for any future students who may be moved to write afresh, concerning the life and work of the great Milanese physician.

An apology may be needed for the occurrence here and there of passages translated from the De Vita Propria and the De Utilitate ex Adversis capienda, passages which some readers may find too frequent and too lengthy, but contemporary opinion is strongly in favour of letting the subject speak for himself as far as may be possible. The date and place of Cardan's quoted works are given in the first citation therefrom; those of his writings which have not been available in separate form have been consulted in the collected edition of his works in ten volumes, edited by Spon, and published at Lyons in 1663.

The author desires to acknowledge with gratitude the valuable assistance in the way of suggestion and emendation which he received from Mr. R.C. Christie during the final revision of the proofs.

Like certain others of the illustrious personages who flourished in his time, Girolamo Cardano, or, as he has become to us by the unwritten law of nomenclature, Jerome Cardan, was fated to suffer the burden and obloquy of bastardy. He was born at Pavia from the illicit union of Fazio Cardano, a Milanese jurisconsult and mathematician of considerable repute, and a young widow, whose maiden name had been Chiara Micheria, his father being fifty-six, and his mother thirty-seven years of age at his birth. The family of Fazio was settled at Gallarate, a town in Milanese territory, and was one which, according to Jerome's contention, could lay claim to considerable antiquity and distinction. He prefers a claim of descent from the house of Castillione, founding the same upon an inscription on the apse of the principal church at Gallarate. He asserts that as far back as 1189 Milo Cardano was Governor of Milan for more than seven years, and according to tradition Franco Cardano, the commander of the forces of Matteo Visconti, was a member of the family. If the claim of the Castillione ancestry be allowed the archives of the race would be still farther enriched by the name of Pope Celestine IV., Godfrey of Milan, who was elected Pope in 1241, and died the same year.

Cardan's immediate ancestors were long-lived. The sons of Fazio Cardano, his great-grandfather, Joanni, Aldo, and Antonio, lived to be severally ninety-four, eighty-eight, and eighty-six years of age....