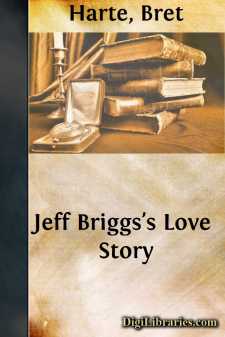 It was raining and blowing at Eldridge's Crossing. From the stately pine-trees on the hill-tops, which were dignifiedly protesting through their rigid spines upward, to the hysterical willows in the hollow, that had whipped themselves into a maudlin fury, there was a general tumult. When the wind lulled, the rain kept up the distraction, firing long volleys across the road, letting loose miniature cataracts from the hill-sides to brawl in the ditches, and beating down the heavy heads of wild oats on the levels; when the rain ceased for a moment the wind charged over the already defeated field, ruffled the gullies, scattered the spray from the roadside pines, and added insult to injury. But both wind and rain concentrated their energies in a malevolent attempt to utterly disperse and scatter the "Half-way House," which seemed to have wholly lost its way, and strayed into the open, where, dazed and bewildered, unprepared and unprotected, it was exposed to the taunting fury of the blast. A loose, shambling, disjointed, hastily built structure—representing the worst features of Pioneer renaissance—it rattled its loose window-sashes like chattering teeth, banged its ill-hung shutters, and admitted so much of the invading storm, that it might have blown up or blown down with equal facility.

Jefferson Briggs, proprietor and landlord of the "Half-way House," had just gone through the formality of closing his house for the night, hanging dangerously out of the window in the vain attempt to subdue a rebellious shutter that had evidently entered into conspiracy with the invaders, and, shutting a door as against a sheriff's posse, was going to bed—i. e., to read himself asleep, as was his custom. As he entered his little bedroom in the attic with a highly exciting novel in his pocket and a kerosene lamp in his hand, the wind, lying in wait for him, instantly extinguished his lamp and slammed the door behind him. Jefferson Briggs relighted the lamp, as if confidentially, in a corner, and, shielding it in the bosom of his red flannel shirt, which gave him the appearance of an illuminated shrine, hung a heavy bear-skin across the window, and then carefully deposited his lamp upon a chair at his bedside. This done, he kicked off his boots, flung them into a corner, and, rolling himself in a blanket, lay down upon the bed. A habit of early rising, bringing with it, presumably, the proverbial accompaniment of health, wisdom, and pecuniary emoluments, had also brought with it certain ideas of the effeminacy of separate toilettes and the virtue of readiness.

In a few moments he was deep in a chapter.

A vague pecking at his door—as of an unseasonable woodpecker, finally asserted itself to his consciousness. "Come in," he said, with his eye still on the page.

The door opened to a gaunt figure, partly composed of bed-quilt and partly of plaid shawl. A predominance of the latter and a long wisp of iron-gray hair determined her sex. She leaned against the post with an air of fatigue, half moral and half physical....