by Estelle M. (Estelle May) Hurll 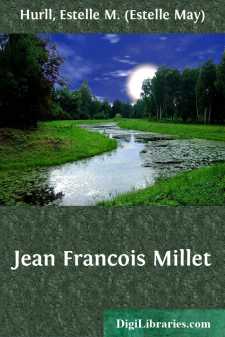 INTRODUCTION I. ON MILLET'S CHARACTER AS AN ARTIST

The distinctive features of Millet's art are so marked that the most inexperienced observer easily identifies his work. As a painter of rustic subjects, he is unlike any other artists who have entered the same field, even those who have taken his own themes. We get at the heart of the matter when we say that Millet derived his art directly from nature. "If I could only do what I like," he said, "I would paint nothing that was not the result of an impression directly received from nature, whether in landscape or in figure." His pictures are convincing evidence that he acted upon this theory. They have a peculiar quality of genuineness beside which all other rustic art seems forced and artificial.

The human side of life touched him most deeply, and in many of his earlier pictures, landscape was secondary. Gradually he grew into the larger conception of a perfect harmony between man and his environment. Henceforth landscape ceased to be a mere setting or background in a figure picture, and became an organic part of the composition. As a critic once wrote of the Shepherdess, "the earth and sky, the scene and the actors, all answer one another, all hold together, belong together." The description applies equally well to many other pictures and particularly to the Angelus, the Sower, and the Gleaners. In all these, landscape and figure are interdependent, fitting together in a perfect unity.

As a painter of landscapes, Millet mastered a wide range of the effects of changing light during different hours of the day. The mists of early morning in Filling the Water-Bottles; the glare of noonday in the Gleaners; the sunset glow in the Angelus and the Shepherdess; the sombre twilight of the Sower; and the glimmering lamplight of the Woman Sewing, each found perfect interpretation. Though showing himself capable of representing powerfully the more violent aspects of nature, he preferred as a rule the normal and quiet.

In figure painting Millet sought neither grace nor beauty, but expression. That he regarded neither of these first two qualities as intrinsically unworthy, we may infer from the grace of the Sower, and the naïve beauty of the Shepherdess and the Woman Sewing. But that expression was of paramount interest to him we see clearly in the Angelus and the Man with the Hoe. The leading characteristic of his art is strength, and he distrusted the ordinary elements of prettiness as taking something from the total effect he wished to produce. "Let no one think that they can force me to prettify my types," he said. "I would rather do nothing than express myself feebly."

It was always his first aim to make his people look as if they belonged to their station. The "mute inglorious Milton" and Maud Muller with her "nameless longings" had no place on his canvases. His was the genuine peasant of field and farm, no imaginary denizen of the poets' Arcady. "The beautiful is the fitting," was his final summary of æsthetic theory, and the theory was put into practice on every canvas....