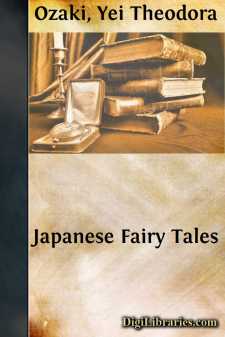 Long, long ago there lived, in Japan a brave warrior known to all as Tawara Toda, or "My Lord Bag of Rice." His true name was Fujiwara Hidesato, and there is a very interesting story of how he came to change his name.

One day he sallied forth in search of adventures, for he had the nature of a warrior and could not bear to be idle. So he buckled on his two swords, took his huge bow, much taller than himself, in his hand, and slinging his quiver on his back started out. He had not gone far when he came to the bridge of Seta-no-Karashi spanning one end of the beautiful Lake Biwa. No sooner had he set foot on the bridge than he saw lying right across his path a huge serpent-dragon. Its body was so big that it looked like the trunk of a large pine tree and it took up the whole width of the bridge. One of its huge claws rested on the parapet of one side of the bridge, while its tail lay right against the other. The monster seemed to be asleep, and as it breathed, fire and smoke came out of its nostrils.

At first Hidesato could not help feeling alarmed at the sight of this horrible reptile lying in his path, for he must either turn back or walk right over its body. He was a brave man, however, and putting aside all fear went forward dauntlessly. Crunch, crunch! he stepped now on the dragon's body, now between its coils, and without even one glance backward he went on his way.

He had only gone a few steps when he heard some one calling him from behind. On turning back he was much surprised to see that the monster dragon had entirely disappeared and in its place was a strange-looking man, who was bowing most ceremoniously to the ground. His red hair streamed over his shoulders and was surmounted by a crown in the shape of a dragon's head, and his sea-green dress was patterned with shells. Hidesato knew at once that this was no ordinary mortal and he wondered much at the strange occurrence. Where had the dragon gone in such a short space of time? Or had it transformed itself into this man, and what did the whole thing mean? While these thoughts passed through his mind he had come up to the man on the bridge and now addressed him:

"Was it you that called me just now?"

"Yes, it was I," answered the man: "I have an earnest request to make to you. Do you think you can grant it to me?"

"If it is in my power to do so I will," answered Hidesato, "but first tell me who you are?"

"I am the Dragon King of the Lake, and my home is in these waters just under this bridge."

"And what is it you have to ask of me!" said Hidesato.

"I want you to kill my mortal enemy the centipede, who lives on the mountain beyond," and the Dragon King pointed to a high peak on the opposite shore of the lake.

"I have lived now for many years in this lake and I have a large family of children and grand-children. For some time past we have lived in terror, for a monster centipede has discovered our home, and night after night it comes and carries off one of my family. I am powerless to save them. If it goes on much longer like this, not only shall I lose all my children, but I myself must fall a victim to the monster. I am, therefore, very unhappy, and in my extremity I determined to ask the help of a human being....