Japan A Record in Colour 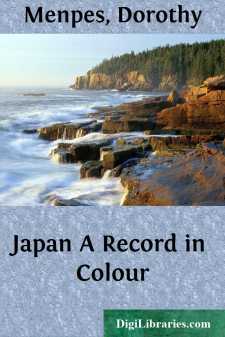 CHAPTER I ART AND THE DRAMA

I always agree with that man who said, “Let me make the nation’s songs and I care not who frames her laws,” or words to that effect, for, in my opinion, nothing so well indicates national character or so keenly accentuates the difference between individuals and nations as the way in which they spend their leisure hours; and the theatres of Japan are thoroughly typical of the people’s character. It would be utterly impossible for the Japanese to keep art out of their lives. It creeps into everything, and is as the very air they breathe. Art with them is not only a conscious effort to achieve the beautiful, but also an instinctive expression of inherited taste. It beautifies their homes and pervades their gardens; and perhaps one never realises this all-dominating power more fully than when in a Japanese theatre, which is, invariably, a veritable temple of art. But here with us in the West it is different. We have no art, and our methods merely lead us to deception, while we do not begin to understand those few great truths which form the basis of oriental philosophy, and without which perfection in the dramatic art is impossible. For example, the philosophy of balance, of which the Japanese are past masters, is to us unknown. The fact that Nature is commonplace, thereby forming a background, as it were, for Tragedy and the spirit of life to work, has never occurred to us; while the background of our Western play is not by any means a plan created by a true artist upon which to display the dramatic picture as it is in Japan, but simply a background to advertise the stage-manager’s imitative talent. The result is, of course, that the acting and the environment are at variance instead of being in harmonic unity. But we in the West have not time to think of vague things, such as balance and breadth and the creating of pictures. What we want is realism; we want a sky to look like a real sky, and the moon in it to look like a real moon, even if it travels by clock-work, as it has been known to do occasionally. And so real is this clock-work moon that we are deceived into imagining that it is the moon, the actual moon. But the deception is not pleasant; in fact, it almost gives you indigestion to see a moon, and such a moon, careering over the whole sky in half an hour. In Japan they would not occupy themselves with making you believe that a moon on the stage was a real one—they would consider such false realism as a bit of gross degradation—but they would take the greatest possible pains as to the proper placing of that palpably pasteboard moon of theirs, even if they had to hold it up in the sky by the aid of a broom-stick.

In Japan the scenic work of a play is handled by one man alone, and that man is the dramatic author, who is almost invariably a great artist. To him the stage is a huge canvas upon which he is to paint his picture, and of which each actor forms a component part. This picture of his has to be thought out in every detail; he has to think of his figures in relation to his background, just as a Japanese architect when building a house or a temple takes into consideration the surrounding scenery, and even the trees and the hills, in order to form a complete picture, perfect in balance and in form....