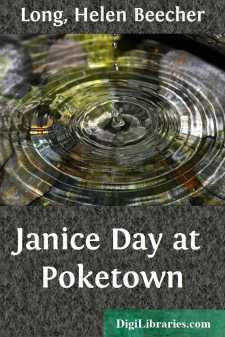 CHAPTER I A NEW-FASHIONED GIRL

"Well! this is certainly a relief from the stuffy old cars," said Janice Day, as she reached the upper deck of the lake steamer, dropped her suitcase, and drew in her first full breath of the pure air.

"What a beautiful lake!" she went on. "And how big! Why—I had no idea! I wonder how far Poketown is from here?"

The ancient sidewheel steamer was small and there were few passengers on the upper deck, forward. Janice secured a campstool and sat down near the rail to look off over the water.

The officious man in the blue cap on the dock had shouted "All aboard!" the moment the passengers left the cars of the little narrow-gauge railroad, on which the girl had been riding for more than two hours; but it was some minutes before the wheezy old steamer got under way.

Janice was interested in everything she saw—even in the clumsy warping off of the Constance Colfax, when her hawsers were finally released.

"Goodness me!" thought the girl, chuckling "what a ridiculous old tub it is! How different everything East here is from Greensboro. There! we're really off!"

The water hissed and splashed, as the wheels of the steamer began to turn rheumatically. The walking-beam heaved up and down with many a painful creak.

"Why! that place is real pretty—when you look at it from the lake," murmured Janice, looking back at the little landing. "I wonder if Poketown will be like it?"

She looked about her, half tempted to ask a question of somebody. There was but a single passenger near her—a little, old lady in an old-fashioned black mantilla with jet trimming, and wearing black lace half-mitts and a little bonnet that had been so long out of date that it was almost in the mode again.

She was seated with her back against the cabin house, and when the steamer rolled a little the ball of knitting-cotton, which she had taken out of her deep, bead-bespangled bag, bounced out of her lap and rolled across the deck almost to the feet of Janice.

Up the girl jumped and secured the runaway ball, winding the cotton as she approached the old lady, who peered up at her, her head on one side and her eyes sparkling, like an inquisitive bird.

"I don't believe you do, Ma'am," agreed Janice, smiling, and although she could not be called "pretty" in the sense in which the term is usually written, when Janice smiled her determined, and rather intellectual face became very attractive.

"You don't belong in these parts?" pursued the old lady.

"Oh, no, Ma'am. I come from Greensboro," and the girl named the middle western state in which her home was situated.

"Do tell! You come a long distance, don't ye?" exclaimed her fellow-passenger. "You're one of these new-fashioned gals that travel alone, an' all that sort o' thing, ain't ye? I reckon your folks has got plenty of confidence in ye."

Janice laughed again, and drew her campstool to the old lady's side....