Janet of the Dunes 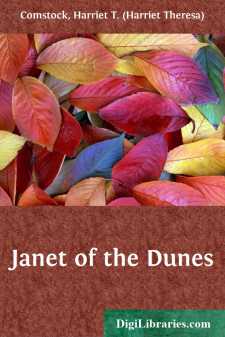 A sweeping curve of glistening beach. A full palpitating sea lying under the languid heat of a late June afternoon. The low, red Life Saving Station, with two small cottages huddling close to it in friendly fashion, as if conscious of the utter loneliness of sea and sand dune. And in front of one of these houses sat Cap'n Billy and his Janet!

They two seemed alone in the silent expanse of waste and water, but it in no wise disturbed them. Billy was industriously mending a huge fish net spread out upon the sands. Janet was planning a mode of attack, in order to preserve unto herself the very loneliness and isolation that surrounded them.

In Janet's hands Cap'n Billy knew himself a craven coward. Only by keeping his eyes away from the face near him could he hope for success in argument. And Cap'n Billy, with all the strength of his simple, honest nature, meant to succeed in the present course—if Janet would permit him!

It was yet to be discovered how beautiful was the girl, crouching upon the sands. So unlike was she to the young people of the Station that she repelled, rather than attracted, the common eye. Tall, slim, and sinewy was she, with the quick strength of a boy. The smooth, brown skin had the fineness and delicacy of exquisite bronze. Some attempt had been made earlier in the day to confine the splendid hair with strong strands of seaweed, but the breeze of the later morning had treated the matter contemptuously, and the shining waves were beautifully disordered. Out of all keeping with this brown ruggedness were Janet's eyes. Like colorless pools they lay protected by their dark fringes, until emotion moved them to tint and expression. Did the sky of Janet's day prove kind, what eyes could be as soft and blue as hers? Did storm threaten, a grayness brooded, a grayness quite capable of changing to ominous black.

Cap'n Billy, trained to watching for storms and danger, knew the signals, and now, for safety, lay low.

The eyes were mild and sun-filled, the face bewitchingly friendly; but when Janet took to wheedling, Billy hugged the shore.

"I do that!" muttered Billy, and he pulled the twine energetically.

"What, send your own Janet off to the mainland to stay—except when she runs back?" This last in a tone that might have moved a rock to pity.

"Yes, that, Janet; and ye mustn't come on too often, nuther."

"Oh! Cap'n, and just when we've got the blessed beach to ourselves! Mrs. Jo G. and her kind gone; only the crew and us! Why, Cap'n, this is life!"

"It's distractin' the way ye've shot up. Clar distractin'; an' I ain't been an' done my duty by ye, nuther." Billy yanked a strand of cord vigorously.

"Yes, you have, Cap'n," Janet's tone was dangerously soft; "I'm the very properest girl at the Station. Look at me, Cap'n Daddy!"

But Billy steeled himself, and rigidly attended to the net....